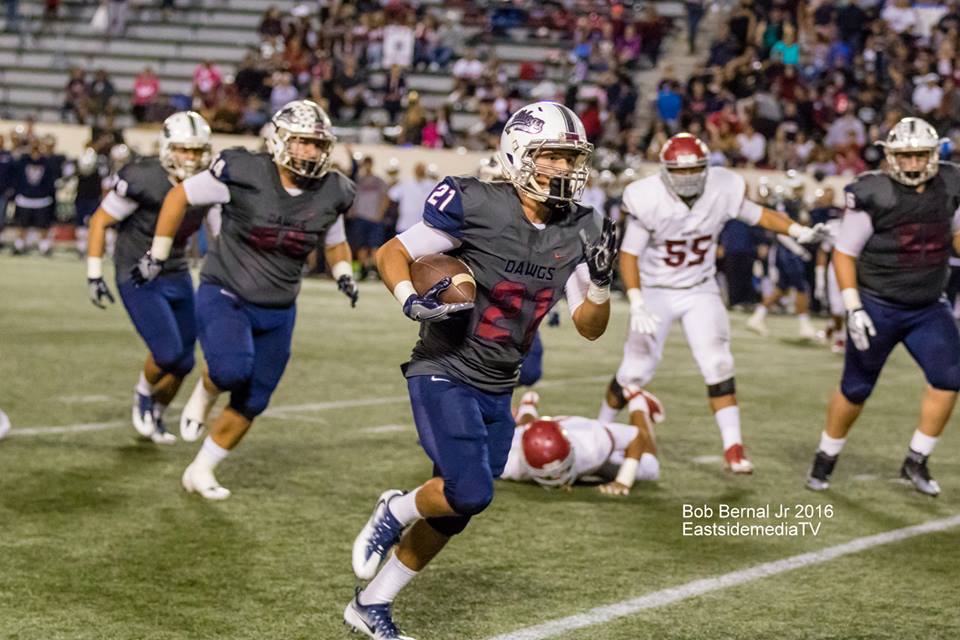 Notes From The Editor: #1) The CIF’s L.A. City Schools Section has designated the 2016 Eastern League Champions, the Garfield Bulldogs, as the #10 seed, and they open their Div. I, 1st Round playoff game on the road versus #7 San Fernando on Thursday, November 10th, at 7 pm. Click here for All L.A. City Schools Playoff Brackets, Div. I, Div. II, and Div. III. #2) We take time out to Salute all of our distinguished veterans from East L.A. and Beyond on their celebrated national holiday, Veterans Day, this Friday, November 11th. We thank you for proudly representing our communities and for your gallant, meritorious, and honorable service to our country. ¡Que viva nuestros veteranos y nuestras veteranas!

For All Garfield Bulldogs and Roosevelt Rough Riders fans, student bodies, alumni groups, parents, and extended family members, we’re offering unique coverage of “The Classic” in this Special Feature. We start with our game recap, move to our Final Look Back, give you our Players of the Game, and then invite you to view our spectacular photo gallery, produced by Bob Bernal, Jr. in association with Erik Sarni, EastsideMediaTV.Com and EastLASportsScene.Com. We sincerely hope you like, share, and appreciate our efforts!

82nd “East L.A. Classic ” Recap: Advantage, and 7th consecutive win, with a dynamic exclamation point, goes to the Bulldogs. They went to work immediately when QB, Henry Adambomb Polanco led the Bulldogs to their first two TDs, one via the air on a 20 yd. pass to WR/Angel Hidalgo and the other on the ground when he rolled-out to his right, followed his big linemen, and turned it upfield, racing to 67yd. TD run. Both scores came in the first quarter.

In the second quarter, the Dawgs went on a five touchdown scoring spree punctuated by five different players who added  their names to the scoring category in the East L.A. Classic’s record book. Those players were Angel Reyes, (9yd. run), Carlos Nuñez, (39 yd. run), Brandyn Jordan (2yd. run), Moses Gonzalez, (23 yd. run) and lastly, PJ Garcia, (13 yd. run). At this point in the game, with two minutes showing on the clock, Garfield scored its 49th point. This brought the Head Referee to ask both Head Coaches if they would allow the game clock to be set to “running clock” mode. [The CIF’s rule on point spreads is, that if a team is losing by more than 35 points during any point in the game, then by provision, the rule could be enforced if all three parties agree. The two main points of emphasis in reaching this decision are: 1) it spares the losing team from further humiliation and; 2) it ensures that a serious concern for player safety is taken into account.]

After their on-the-field meeting, it was apparent that Roosevelt’s Head Coach, Ricardo Zepeda agreed, and with that, the final minute of the first half, followed by the entire second half were played under the “running clock” mode. Since our coverage of the rivalry started in 1992, we believe this may have been the first time that this regulation was applied. The half-time score was 49-0.

For the second half of play, in a “team-spirited” decision, Garfield Head Coach Lorenzo Hernandez utilized many of his reserves and rewarded them with a most memorable experience of “playing-time” in the “East L.A. Classic.”  In clear contrast to the first half, the Bulldogs would not score in the second half. The only Rough Rider points for the night came on a 35 yd. field goal by placekicker, José Castro, with 3 minutes remaining in the game. Let it be noted that the Rough Riders played hard and to their best abilities. No doubt that they left it all out on the field, as they displayed their sportsmanship and graciousness in defeat. Coach Zepeda can certainly be very proud of his players who never quit during this long and most difficult season. With that said, he can now begin to plan for next season with high hopes of improving in the vital areas of the game. We look forward to following you in 2017.

Final Score: Garfield 49 – Roosevelt 3. With their victory, the Bulldogs captured the Eastern League crown and advanced to the playoffs.

A Final Look Back: At the end of the game, and at the end of the day, we all came together as one community to watch our teams valiantly compete for a victory on the playing field with high hopes and soaring spirits. What the crowd of 15,000, plus a Spectrum Cable TV audience enjoyably witnessed was the abundant spirit and enthusiastic pride of each school, as characterized by their Homecoming Courts, their Marching Bands, their Dance/Drill/Flag teams, their Alumni groups’ participation, a deserving group of high-achieving students who were awarded financial aid for college, and in the end, one of the most festive and colorful celebrations of our annual event. This is truly one of the most memorable and remarkable high school sporting events in our city’s and country’s history of high school football. One that is steeped with a time-honored and renowned tradition, one that always carries the undying hopes for another season of football and the only one that perpetually brings us the highly anticipated, “East L.A. Classic.” Let’s continue to reassure ourselves of its permanent place in our community and appreciate it as one of the most unique celebrations that binds us together as Familia!! Go Garfield Bulldogs and Go Roosevelt Rough Riders!! Muchas Gracias! By: Rico Cabrera, Sr./Editor, EastLASportsScene.Com