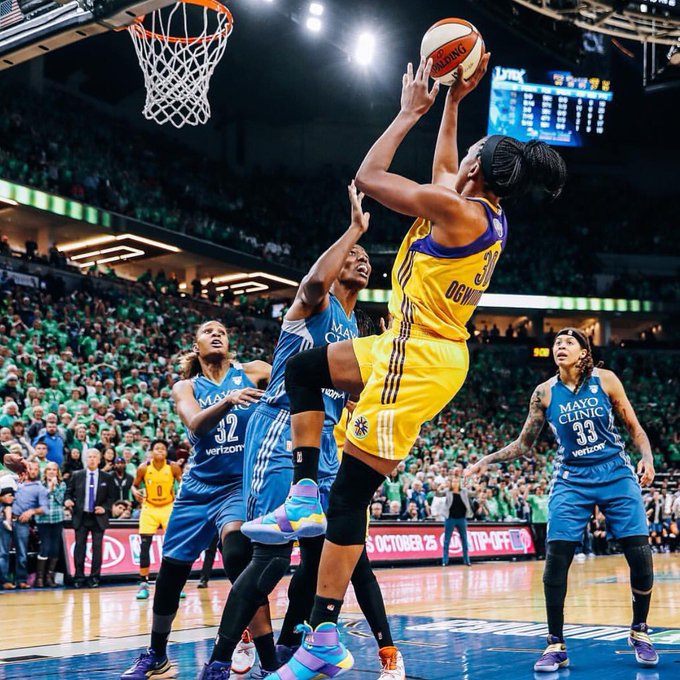 Big-time Congrats to our new 2016 WNBA Champions, the Los Angeles Sparks. They did what they knew they could do—defeat the defending WNBA Champions, Minnesota Lynx, on their home court in the Winner-Take-All Game 5 for the right to be declared World Champions. In what could easily be described as one of the most exciting series in WNBA playoff history, the fifth and final game would fittingly, and very dramatically, come down to an incredible last three seconds, when Nneka Ogwumike sank an off-balance, five foot fade-away jumper. True to her MVP accolade, she showed millions of WNBA, and basketball fans around the world why she was so deserving of her award. Thank you Ms. Ogwumike #30 for a most memorable season and a superlative Finals. We’ll be eagerly waiting to see you and all of your teammates wear your Championship Rings proudly and stylishly. Rico Cabrera, Sr./Editor, EastLASportsScene.Com

Brief Recap on The Road To The Finals: It was a long and grueling season, with only a month off to rest because of the stoppage of league play due to the Rio Olympic Games. When the Sparks resumed play in late July, they would go on to possess the 2nd best record in the WNBA, finishing at 28-6, and thus earning themselves the #2 seed, right behind the Minnesota Lynx. And so the playoffs started, with both of these Western Conference teams earning a Bye until the Semifinal round, all in keeping with the WNBA’s new playoff format.

First up was a best of five series with the Chicago Sky, minus their injured star player, Elena Della Donne. The Sparks took quick advantage of that and then took total care of their business,  easily eliminating their opponent (3-1). After that, it was on to the WNBA Finals versus the Lynx. For the entire coverage of the Series, click here

Note From The Editor: To All Sparks fans and the general public…you are invited to the Championship Celebration scheduled for October 24th at 3 pm. For more details, please see flyer below in our photo gallery.