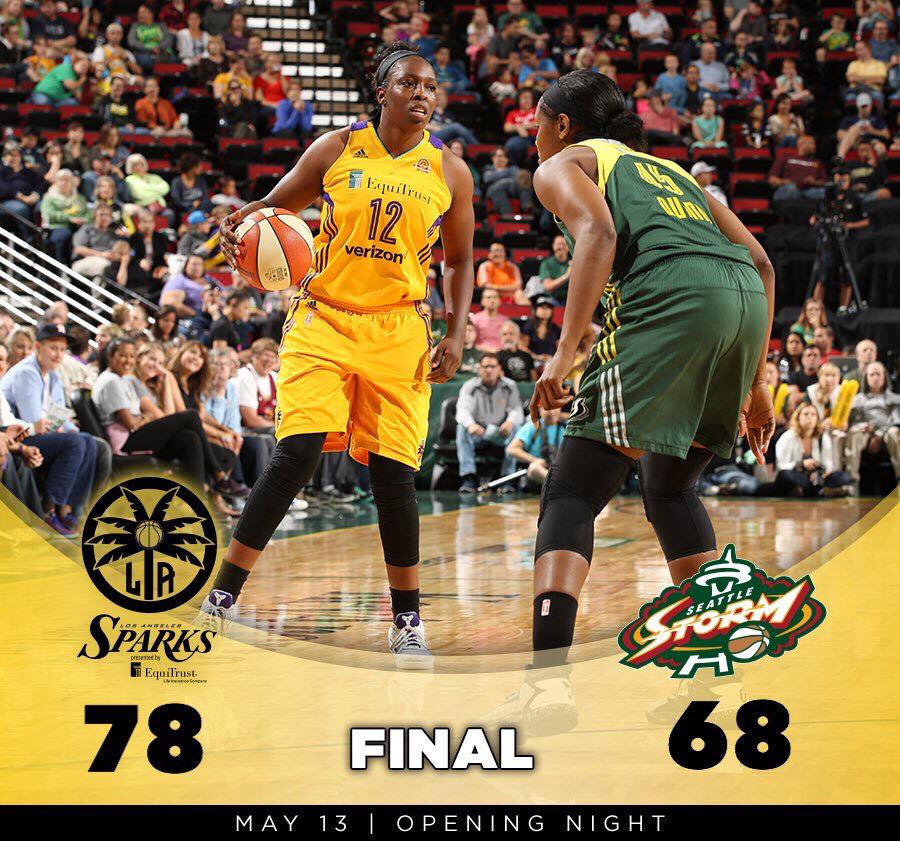 Note From The Editor #1: The L.A. Sparks, new reigning Champions of the WNBA, opened their 2017 season with a comfortable ten point win (78-68) over their long-time Conference rival, the Seattle Storm. Even without the presence of last season’s WNBA Finals, MVP, Candace Parker, plus teammates, Essence Carson and Jantel Lavender (all were in transit back to L.A. from playing overseas), the Sparks were definitely up to the task of registering an opening day win for their highly supportive fanbase. After all, it was fitting that their World Champions Banner unfolding ceremony was the designated marquee attraction of this May 13th celebratory night as witnessed by 10,603 loud, proud and most appreciative fans.

In addition to all of the buzz inside of Staples Center, there were several big-time celebrities who attended the game. The most recognized of all was the future Naismith, and L.A. Laker “Hall of Famer,” Kobe Bryant, who sat in a front-row seat just behind the basket, accompanied by his 10 year-old daughter, Gianna.

Brief Game Summary: As usual, the Sparks were led by their League MVP, Nekka Ogwumike, (Stanford), who poured in 23 points for game high scoring honors. She did not disappoint her adoring fans as she showcased her total game to the maximum effort. Backing up Ogwumike’s work ethic were Tiffany Jackson-Jones who took down a game best 8 rebounds. And continuing where she left off as the team sparkplug, second-year player, Chelsea Gray (Duke) added 8 assists to her already growing stat numbers in the WNBA. After a close 1st half, the Sparks went inot their locker room with a 38-37 lead. They came back to start the 3rd quarter and dropped in only 16 points but held firm on defense, limiting the Storm to a meager 12 points. At the start of the 4th quarter the Sparks had a 5 point lead to work with. Newcomer, Odyssey Sims came off the bench with a strong showing and contributed to the winnning cause with a much-needed 20 points, 4 rebounds, and 6 assists. Head Coach Brian Agler has done a remarkable job in putting a new core of players together in short time to produce another cohesive unit, similar to last year’s WNBA most-dominant team. Put everything together such as skills, leadership, game awareness, effort, and tremendous fan support in this game and it very easily spelled W-I-N #1.

Note From The Editor #2: We take a moment in our write-up to highlight the presence of Seattle’s third-year player and  small forward, #23 Kaleena Mosqueda-Lewis. A native of Pomona, CA., she is yet another Latina athlete to make it to the pros and continue to show her skills and abilities on a national level. Kaleena attended UCONN, was recruited by Head Coach, Gino Auriemma from Mater Dei HS in Santa Ana, CA., and became a highly acclaimed student-athlete earning recognition in her college career by being named to the 2013 Final Four All-Tournament Team as well as being selected to the 2014 AP All-American Team, Honorable Mention. We’re very proud, and highly encouraged to see more of our local players make it to the top. To read and learn more about Kaleena and her remarkable journey in the sport of Basketball, we encourage you to click here. Rico Cabrera, Sr./Editor, EastLASportsScene.Com