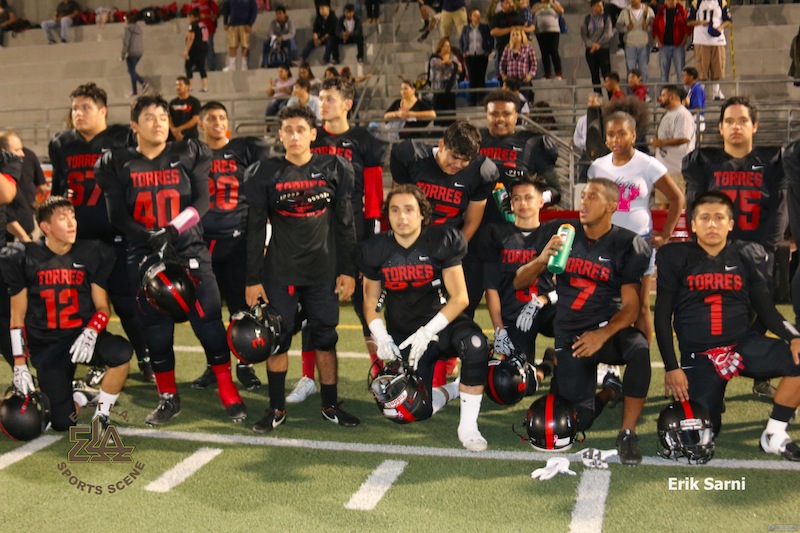 Alerting All of our avid  East L.A. Sports Scene High School Football fans…that to the long-awaited playoffs we now go!! The 2016 CIF playoffs are underway and Round #1 is officially in the books. Congrats to four of our covered teams, Garfield, Torres, Cathedral, and Salesian who all advanced into the Quarter Finals/2nd Round. Here’s our Round-Up #12 – Week 11 that includes a brief recap of how each of our seven teams performed. By: Rico Cabrera, Sr./Editor, EastLASportsScene.Com

For their first round challenge, the Garfield Bulldogs traveled just north to tangle with the Tigers of San Fernando HS, and defeated them by a score of 35-28. Any playoff road victory is surely a confidence builder and Head Coach, Lorenzo Hernandez will have to ask his team to step up big-time in the 2nd Round/Quarter Finals as they are slated to face the always dangerous Dorsey Dons on Friday. [Next: Quarter Finals, Division I, vs. Dorsey @ Jackie Robinson Stadium, Fri. 11/18/16 @ 7 pm]

The Torres Toros received the #3 seed and didn’t disappoint their student body, their administration, their fans from the community, and the selection committee. With home field advantage, they posted a very convincing (47-21) win over the Wolfpack from Angelou HS, located in South Los Angeles. The Toros are again looking forward to their next home playoff game when they face the Central League champions, Hollywood in a same season rematch. In Week 1 they lost at home to the Sheiks by the score of (34-21). But that was then, and much has happened since that game. Keep your eyes squarely fixed on second year Head Coach, Charles Burnley and his Toros. Something very good is happening to this program thanks in great part to his coaching efforts and his coaching staff. A special credit and mention in our story goes to Coach Burnley’s student assistant, Karen Barrera.  [Next: Quarter Finals, Division III, vs. Hollywood Sheiks, (@ Torres), Fri. 11/18/16 @ 7 pm]

The Lincoln Tigers went down in defeat on their homefield in this first round Division II playoff, losing to the Canoga Park Hunters by the score of (47-19). The Tigers could not overcome a bad first half defensively as the Hunters’ air and ground games were in high gear, scoring 20 points while holding the Tigers to just 6. The hill became to steep to climb as the game wore on and the offense just could not overcome the pressured defense that Canoga Park displayed for most of the contest. We salute the Tigers on another very successful season under their longtime Head Coach, Albert Carrillo.

The Wilson Mighty Mules took it hard in losing a close first round Division III match-up with the Coliseum League’s, Manual Arts Toilers, (26-21). After surrendering all of the Toilers’ 26 points in the first half, and managing to only put up 7 of their own, the Mules defense stepped up big-time and played shut-down football in the second half, blanking the Toilers. Then, things started to turn around for the Mules when they scored twice in the third quarter, narrowing the margin to 26-21. But they just couldn’t score the “go-ahead” touchdown and PAT in the 4th quarter to secure this greatly-hoped for playoff win. Head Coach, Eddie Martinez and his Coaching Staff did a remarkable job in leading their team to the playoffs this season, and they are extremely anxious to prepare for 2017.

In a Division 3, first round game, the Cathedral Phantoms remained undefeated as they posted their 11th win of the season defeating the Hart Indians, from Newhall, CA, (34-17). The Indians were ranked #485 nationally and #45 in California. Congrats to Coach Kevin Pearson and the team on this huge playoff win over a powerhouse program and another well-merited Congrats on consistently maintaining their ranking in the L.A. Times Weekly Top 25 poll for the entire season. [Next: Quarter Finals, vs. Rancho Verde Mustangs, from Moreno Valley, CA, (@ Cathedral), Fri. 11/18/16 @ 7 pm].

In Division 5, the Salesian Mustangs, the pride of Boyle Heights, are on the loose and running wild once again as they rebound, rev-up, and revive for the playoffs. This time their first round opponent, the Bishop Diego Cardinals, from Santa Barbara, were victims of Salesian’s highly explosive offensive machine and lost by the final score of (58-20). The Mustangs, a potent force at this time of the season, are very much alive and will take their show on the road once again. We wish them Good Luck and nothing but the Best in their pursuit of the CIF/SS’s Division 5 crown. [Next: Quarter Finals vs. the Martin Luther King Wolves, from Riverside, CA, (@ Neutral site), Fri. 11/18/16 @ 7 pm].

In Division 1, the Bishop Amat Lancers met with a very untimely defeat on their home turf by the Vista Murrieta Broncos, representing Murrieta, CA. With the loss, the Lancers concluded a very respectable, and an overall (7-4) winning season. Congrats on reaching the playoffs in this rebuilding year and for maintaining their ranking in the L.A. Times Weekly Top 25 teams. The Mission League continues to be the home of several of Southern California’s top ranked teams, such as Serra (Gardena) and Chaminade, (West Hills, CA), and we strongly believe that Head Coach, Steve Hagerty, will guide the Lancers to contend for the League’s title in 2017.