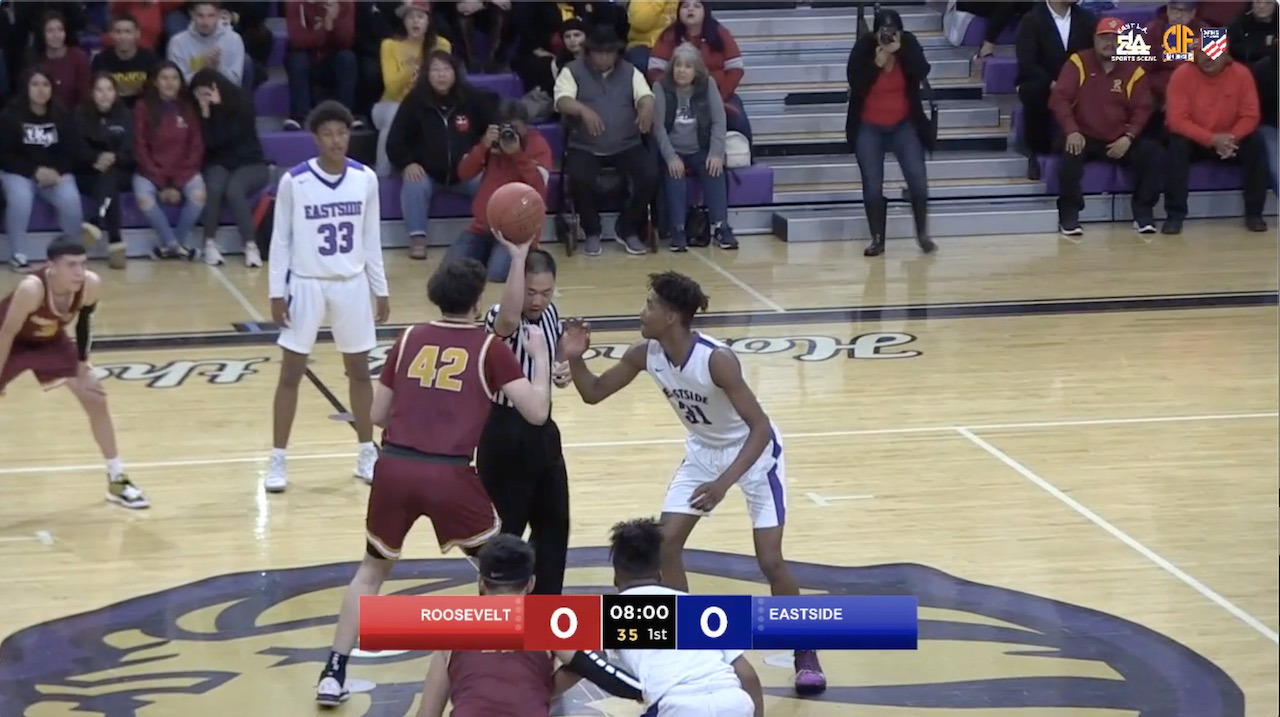 Special Note From The Editor: At this time, East L.A. Sports Scene Productions, the NFHS Network’s local Affiliate, is very pleased to inform all of our followers who are also subscribers to NFHS that our recently produced CIF/State, Southern Regional Division V Championship game between Roosevelt and Eastside, is now available for improved viewing on the Network’s Video On Demand (VOD) feature. Simply go to the Network screen below and log-in to watch.  We deeply apologize to those who may have been adversely impacted by the location’s unstable Wi-Fi signal that was used to “Live Stream” this game. If you are a new follower, and would like to watch this game, please go to the video embedded below, and become a new subscriber for $10.99  a month, or take advantage of their discounted annual fee. You may cancel at any time after your first month of service.

(Lancaster, CA/Antelope Valley)—It can truly be said that the #2 seeded Mighty Roosevelt Rough Riders fought extremely hard, competed strongly to the very end, and left it all on the floor on Tuesday night, 3/10, as they lost a close one in the CIF/State Southern Region Championship game in Lancaster, CA the home of the Eastside Lions, the #1 seed in their bracket. The final score would read, Eastside  53  Roosevelt  48.

Final Game Background: The once again “underdog” Rough Riders, playing in the longest basketball season’s in school history, a grand total of (33), as their overall record of (22-11) now reflects, finally lost in this year’s playoff run to the CIF/State Division 5 Championship to the #1 seed, Eastside “Lions” in a very competitive “War On The Floor” type of game. More importantly, in their fantastic winning streak of seven consecutive playoff triumphs, this Rough Rider team and its Coaches, will forever and proudly claim the CIF/L.A. City Section’s 2020 Division II title as a true measure of their historic, incredible, life-changing, and grand accomplishment.

Coming off a grueling, and highly impressive three game winning streak to start their State playoff run on 3/3 against Cathedral City, the Riders took to the court on this night, with their usual confident look. It certainly helped that their visiting side of Eastside High gymnasium’s bleachers were completely packed well-before the start of this CIF/State Championship basketball match-up when the Battle of the Top Seeds, #1 and #2, would compete for the coveted title. Who could have asked for a more enticing and highly-awaited showdown?

Game Summary: (1st Half)—The first period ended with a (14-9) lead for Eastside. It was evident that their Head Coach, Francisco Muñoz was going to make it an uptempo game with fast breaks coming at any given time. The Riders showed a few jitters but by the end of the stanza, they had scored from both the inside and the permiter via shots by point guard, Jose Arellano, Cesar Romo, and Jhonny Gomez. Eastside’s Co-Captain and point guard, Aubrey Pender had (5) points for the Lions. In the 2nd quarter, the Riders took advantage of the post play by Romo as he was effective inside, putting up (6) points. Meanwhile, Arellano began to peck away with his floater, and a 3 pointer, totaling (5) points. For Eastside, they were paced by Co-Captain Omar Barber’s (4) points, 3 coming on a 3-point shot. They were outscored by the Riders, (13-11) in this period.

(2nd Half)—The Rough Riders were in full comeback mode in the 3rd period as they netted a total of (15) compared to (12) for the Lions. The difference in the game at this time was Roosevelt’s Arellano, who made his shots while adding several assists to Gomez and Romo. Reserve senior forward, Julio Garcia chipped in with a timely 3 pointer from deep in the far right corner. Vince Burgueño and Roberto Peña were working hard on defense and rebounding well, but they did not score. Meanwhile, for the Lions, Pender continued to score as he added another (5), and Dohhm Clayton, a starting forward, hit a timely 3 pointer. Reserve forward, Daybreon Chastang added (4) points during his valued playing time, for a team total of (12) points in the quarter. The score was tied at (37-37) to end the period.

And now, it was time for the final quarter of the season to start. Both teams played each other very closely until the 2 minute mark left in the contest. With the score, (49-44), the Lions scored on an amazing slam dunk and rim-rattler by Center/6-7/Nate Anderson as he came downcourt in his left wing position, took a beautifully-timed lob from his guard, Clayton, and then hammered it home, much to the great delight and gigantic roar from their crowd. This came with 1:50 left in the game. Next, after Roosevelt’s Head Coach Mario Perez used his last time-out, he drew up a play for Romo on the baseline in-bound pass and it looked positive for the Center to score, but there to defend was Anderson, the rim protector, who did his job when he swatted away Romo’s shot from underneath. Luckily for the Riders, it went into the hands of Burgueño, but his 5′ shot, that looked like it would go, somehow carromed off the left side of the rim and into the hands of Anderson who was immediately fouled to stop the clock. The Riders still had life as Anderson missed his first shot of the bonus. The Riders failed to score on their ensuing possession and then, with just 9.9 seconds left in the game, Lions point guard, Timothy Schnyder was fouled for a “one & one” bonus. He hit both to end the game scoring and thus, secured the win. The Riders brought the ball up and J. Garcia took the game’s final shot, a long three pointer, and missed it, thus ending the contest.