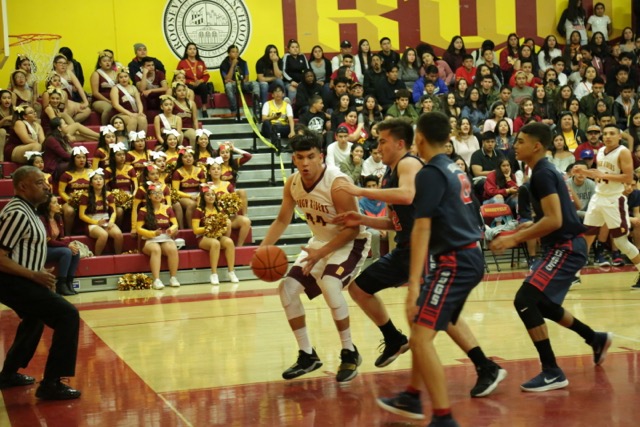 Note From The Editor: We invite All of our followers to view our posting of the Roosevelt vs Garfield HS Boys Varsity Basketball game that took place on Friday, 2/9/18. This posting contains our write-up as well as a great photo gallery. The full “Play-By-Play” game video will be posted shortly on our website and YouTube Channel.

The standing room only crowd of 1,000+ who witnessed the annual “East L.A. – Hardwood Classic,” Game #2, otherwise known as the Roosevelt Rough Riders (8-3) facing off with their traditional rival, the Garfield Bulldogs (9-2), were treated to a competitive defensive match-up. The final Eastern League game of the 2017-2018 season took place at Roosevelt’s Rough Rider Gymnasium and wasn’t decided until the final 3 minutes of the game.

Brief Game Summary: This “War on the Floor” was another defensive battle between these two long-time high school rivals. Garfield won their first encounter back on 1/12/18 by the score of 43-40. Now let’s get to our recap of this game. The first half belonged to the Mario Perez–coached Riders as they provided just a bit more offense than the Ricardo Rivas–coached  Bulldogs, to claim a close lead at half time, 21-19.

The third quarter saw the Riders expand their to lead to six as the period ended in a (30-24) advantage. However, the fourth and final quarter saw the Riders offense, which had plenty of wide-open shots both from the perimeter and close-in to the basket, go extremely ice-cold while the Bulldogs played hard on both offense and defense to rally and come from behind. They finally caught their opponent at (32-32) and then went to secure the victory by going to the free throw line and making critical shots to give them the final winning margin of (37-32).

With their win, the Bulldogs (10-2) captured 2nd place in the League, while the Riders record fell to (8-4) and finished in 3rd place. Both teams played well enough to earn themselves berths in the Division-2 tournament which begins on Thurs. 2/15.