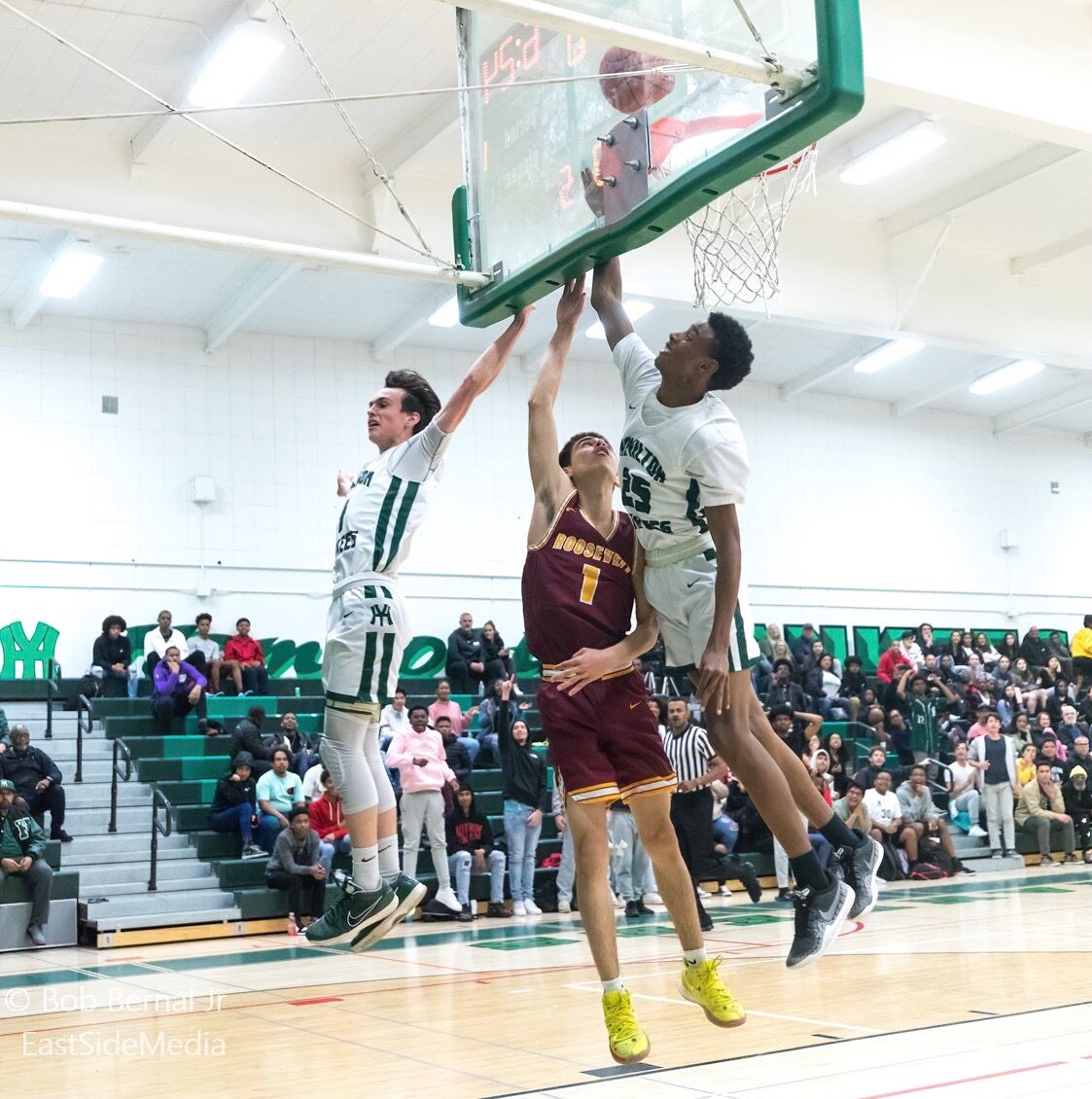 (Hamilton High School, West Los Angeles)—The Roosevelt Rough Riders are on a huge, and timely five game winning streak in their role as the Underdog from Boyle Heights/East Los Angeles, that places no limits on itself. Witness the fact that they edged out the #3 seed, Hamilton HS Yankees, on their home court in the CIF/L.A. City Section’s Division 2 quarterfinal playoff game yesterday, Wednesday, 2/19. The final score was Roosevelt (62), Hamilton (59). One more incredible, upset victory over a higher seeded opponent will propel them into the Division’s Championship game next weekend, on Friday, 2/28.

Next up for the ever-confident growing Riders is a bus trip West towards the Pacific Ocean on Saturday and a visit to the neutral site for the Division’s Semifinals/Final 4 Tournament, Palisades High. In a scheduled 12 noon tip-off, this is where they will take on the #2 seeded, Polytechnic Parrots, from the San Fernando Valley’s City of Sun Valley, winners of their quarterfinal game against the Garfield Bulldogs. That final score was Poly (56) Garfield (49).

Hamilton Game Recap: Having monster games for the Rough Riders in this quarterfinal game were #1/SR/José Arellano who, for his last three consecutive games, has remained on fire with his potent offensive skills, pouring in a game high (28) points to smartly go along with a most impressive game stat-line of (3) 3 pointers, (6) assists, (7) rebounds, and an impressive (6) steals. He was followed by the team’s sharpshooter, #1/SO/Jhonny Gomez with 15 points, coming mostly by way of (4) 3 pointers, coupled with (4) steals, (2) assists, and (2) boards. 6-6 /Center/#42/SR/Cesar Romo, pitched in with double digits again accumulating (13) points, on 5/7 shot attempts, collecting (8) big rebounds, adding (2) blocked shots and (1) steal. Although he did not score, #22/Power Forward/SR/Vince Burgueño played like a “Tower of Power” as his outstanding game stat-line reveals, (7) rebounds, (5) assists, (4) timely blocks, and (2) steals. Can we say he was the secret weapon that Coach Perez had at his disposal. Looks like that was the case in his game difference-making. Rounding out the Riders excellent team efforts were #4/SR/Julio Garcia who had (1) 3 pointer, (3) assists, (3) rebounds, and (1) steal while #11/SR/Roberto Peña chimed in with (1) 3 pointer, (3) boards, (2) steals, and (1) assist.

East L.A. Sports Scene wishes to give a Special Acknowledgement to Twitter user @SwaggyCDawg5 for the Final post-game stats.

Special Note From The Editor: We will make an attempt to secure the “Live Stream” permissions to carry this critical game from the CIF/L.A. City Section’s Main Office and the NFHSNetwork.Com. If successful, we will provide All of our viewers from Boyle Heights, East L.A. and Beyond, as well as the Roosevelt Alumni Association the customary link for you to subscribe to the Network and view the game.