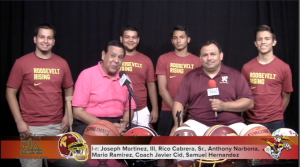 For all Roosevelt “Rough Rider” Fans, here is our 2nd annual presentation of our In-Studio program devoted to Head Coach, Javier Cid and his players. Watch intently as Coach Cid provides us with his 2013 season recap and his future outlook for the 2014 season with many underclassmen ready to take center stage in the Fall. Take a look at four “key” players who joined Coach Cid and Rico Cabrera, Sr. for this highly informative show. Players to keep your eyes on are the following: #1) Samuel “Sammy” Hernandez, slated to take over the starting QB duties; #2) Joseph Martinez, III, be prepared to hear his name very often while he’s digging in as DE and DT; #3) Mario Ramirez, one of the most multi-talented players Coach has had on one of his teams in quite some time, demonstrated by the positions he plays- WR/CB/P/Special Teams; and lastly, #4) Anthony Narbona, a huge two-way player who thrives on the competition while playing OG and DT every week of the season. Rider Nation is Rising and Coach Cid is busy preparing his team for another successful season. Don’t miss this program!