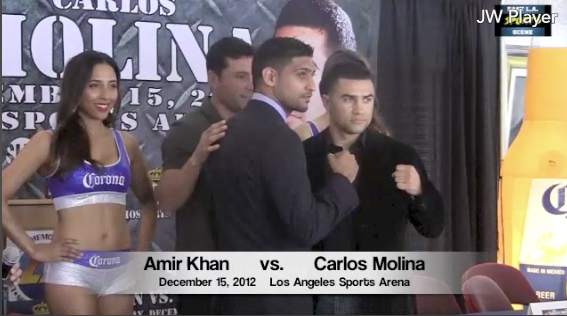 In a late October press conference, Oscar de la Hoya, winner of 10 world titles in 6 different weight classes, announces the two combatants for their December 15th bout at the Los Angeles Sports Arena, Amir “King” Khan vs. Carlos Molina. Khan, 26, the former Unified Super Lightweight World Champion, and native of Bolton, England, will face a seasoned and well-followed local opponent in Molina. Khan has commented that this will serve as his “comeback” fight after losing his last two bouts while making a signifcant change in his new trainer, adding the well-respected, Virgil Hunter. Molina, 26, a former National Amateur Champion, currently undefeated with a 17-0 record, (7 via KO), is a native of Norwalk, CA. with an extensive fan following. He made his Pro debut in 2007 and in the last five years has proven that he has all of the skills and qualities to move into the sport’s spotlight. Carlos comes from a boxing family, and his two twin brothers, Javier and Oscar, former Olympians for the U.S.A. and Mexico respectively, are also professional boxers. The winner of this fight will be crowned as the new WBC Silver Super Lightweight Champion. The day-long boxing event will feature a holiday “fan-fest” complete with musical acts, memorabilia/gift giveaways, autograph signings, and “meet & greets” with some of the sport’s biggest stars. All day-of-event donated Christmas Toys, plus another 2,500 donated by the Oscar De la Hoya Foundation, will be distributed to pre-selected underprivilieged families from three Green Dot Public Schools. A special interview with Oscar, “The Golden Boy” from Garfield High School