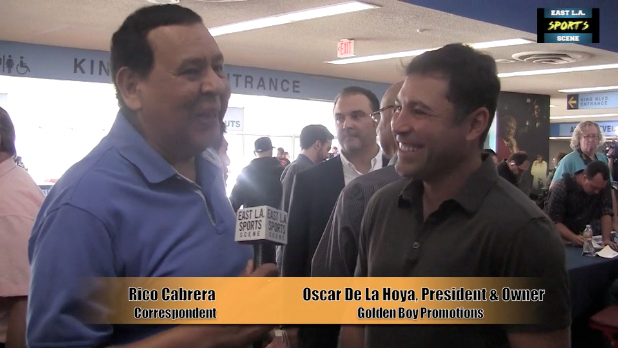 East L.A. Sports Scene takes time out to reach into one of its previous productions and extract two powerful interviews with East L.A.’s “Golden Boy” of both Amateur and Professional Boxing. He is none other than our very own, and East L.A.’s native son, Oscar De La Hoya. These two interviews took place during the build-up to the big Amir Khan vs. Carlos Molina bout, held last December at the L.A. Sports Arena. The interviews focus on a number of themes, especially his rise to prominenece in the pro boxing promotion circles via his Golden Boy Promotions, now one of the biggest enterprises in the world. They also take a look back to the very beginning of Oscar’s career–as a graduate of Garfield HS, a 1992 member of the U.S. Olympic Boxing Team, his Pro career, and his founding of the Animo Oscar De La Hoya Charter HS. Sit back, relax, and enjoy Oscar as he stops to give us all a very nice “snapshot” of himself and his plans for the continued support of our community.