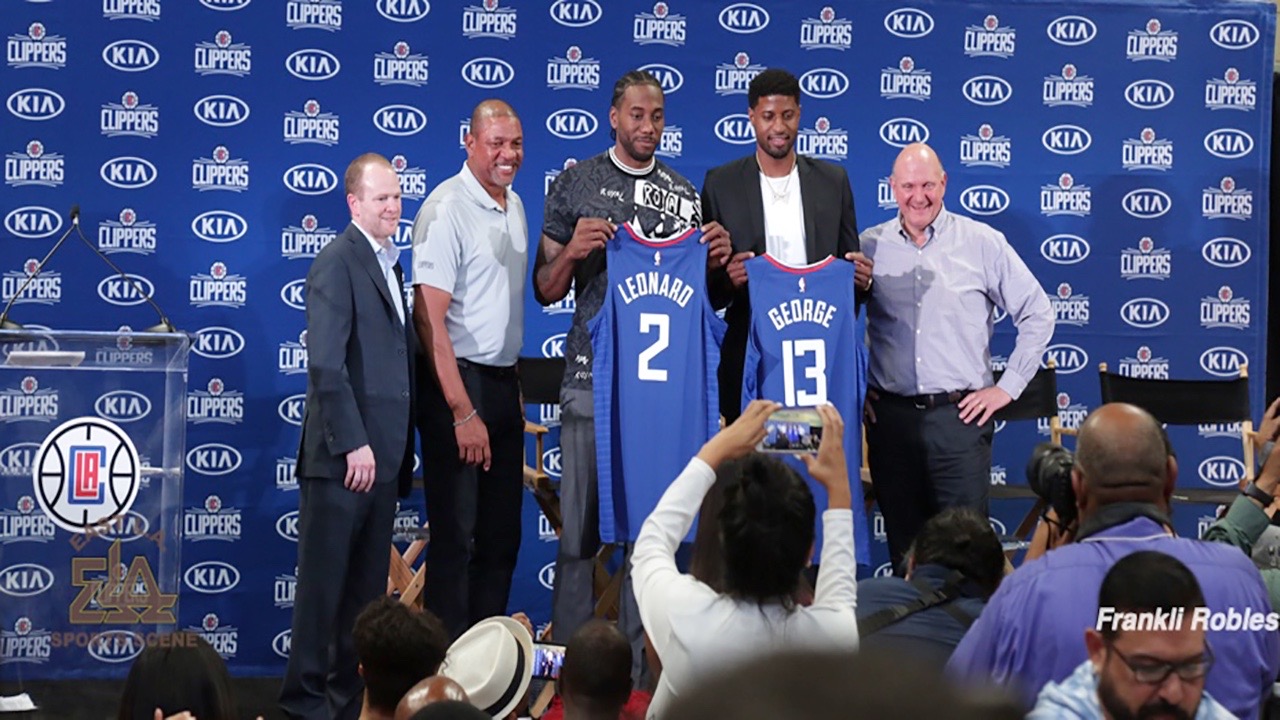 (East Los Angeles, CA) [July 30, 2020]—Announcing loudly and clearly…“Gather Round” to All NBA fans!! As we have now come to know, one of the World’s biggest sports returns center-stage in Orlando, Florida after a (4) month respite due to the ever-dangerous Coronavirus (COVID-19) inflicting serious illness on 1.5 million victims, and generating fatalities to over 150,000+ citizens and residents of our nation. As we now move forward even with a negative pandemic in our midst, we encounter a huge positive…it’s showtime once again for millions of basketball fans residing in the USA and Canada, as 22 of the 30 NBA teams are set to take up the remainder of their season starting with a marquee “match-up” of what could prove to be a closer look at the upcoming playoffs—L.A. Lakers vs. L.A. Clippers.

All of us are anxious to know how our favorites team or teams will perform inside of the “Bubble” and very obviously, with No Fans in attendance, and we might add, No Home Court Advantage. The NBA and Commissioner Adam Silver have taken every precaution to prevent the invisible, but highly possible entry of the virus into the venue, and we will be watching closely, and probably on a “day-to-day” basis to see if the players can evade even the slightest symptoms of COVID-19. Thus far, their counterparts of the WNBA, with (4) games already played in their newly anointed “Wubble,” have remained free of any players becoming infected.

And thus, with all of this breaking news hovering over  the “Tip-Off,” Los Angeles, our home town, will be globally represented by its two teams, as they do battle in their highly awaited “War On The Floor.” Both teams were playing well before the virus, but now it is with the virus to see who will prevail. It could be a major factor in each and every team’s run for the title. We’ll have to keep a close-eye on each and every player/team situation that occurs, not only during competition, but also away from it. Good news….thus far, after a total of (344) player tests have been administered, over 9 days in the Bubble,…zero positive results have been recorded.

Pre-Game Review: The Lakers resume with a great (49-14) record, while the Clippers show (44-20). The Lakers lead the Western Conference while the Clippers are in 2nd. Personnel: The Lakers return with LeBron James, Anthony Davis, and Kyle Kuzma. AD is good to go after a scary play in a recent scrimmage game. Dwight Howard and Danny Green all also ready to go. On the other hand, the Clippers will show Paul George and Kawhi Leonard in their starting line-up. Patrick Beverley, absent due to a personal decision, will play if he returns by game-time. Montrezl  Harrell and Lou Williams will rest this one out. A reminder that these (8) games are all for seeding purposes. The Playoffs are set to open on Aug. 17th.

Starting tonight, players will have the option of selecting from a list of Social Justice messages to post on the back of their jerseys. The partial list mentions a few of the most common such as: Black Lives Matter, Sí Se Puede, (Yes We Can), Say Their Names, Power to the People, and Say Her Name.

This game will be televised nationally on TNT, and locally on Prime Ticket and Spectrum SportsNet. Tip-off is set for 6:00 pm (PST). It’s now T-minus 60 minutes and counting before ignition occurs. So strap in, get comfortable, and prepare to cheer your team onto victory. Good Luck to all teams and may yours come out the winner as often as possible!