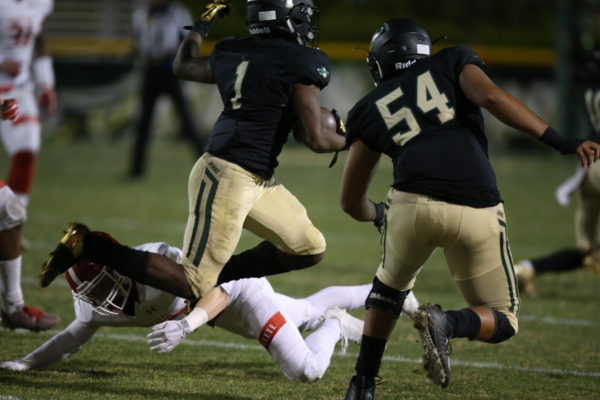 Note From The Editor: 12/14/17 – We’ve updated our posting to now include the Narbonne Gauchos’ tremendous win in last Saturday night’s 1-A CIF/State Southern Regional Playoff Bowl Championship over the visiting Paraclete Spirits by the score of 56-14. The game was cable-casted over the SportsNetLA channel, and if you attended, either in person, or watched it, then you were thinking that this was a near repeat of the Gauchos’ inaugural L.A. City Section “Open” Division Championship victory over the Crenshaw Cougars on 12/1/17. To see our full Crenshaw game highlight video, and post-game interviews with Head Coach Manuel Douglas, Jalen Chatman, Darien Butler, and Jermar Jefferson, then please click here. We’ve also included a great photo gallery shot by Erik Sarni of this huge win for your viewing.

Brief Game Summary: Narbonne opted to receive the opening Kick-off and that pretty much set the tone for the entire game. The Gauchos offensive steamroller went to work immediately and with the power running of Jermar Jefferson, there was no stopping them. The Gauchos lighted the scoreboard often in the first quarter and would never look back from there. Led by JR/OT, Jonah Tauanu’u, who simply opened gigantic running lanes for his backs, and similar to their second quarter offensive outburst in the Crenshaw game a week earlier, it was another awesome display of the huge “O” line hitting its blocking schemes on all cylinders. Paraclete’s front four and its linebackers were simply no match to stop or contain the Gauchos’ rapid-fire drives. And to give the defense its proper credits, the veteran, highly skilled and athletic cluster of players…Logan Taylor, Darien Butler, Raymond Scott, and Julian Lewis, never allowed the Paraclete offense an opportunity to answer back. At halftime the score was 35-0, Narbonne.

The second half was played soundly but cautiously by the Gauchos, as they did manage to score three more TDs. And due to the large point spread, at one point 48-7, Head Coach Manuel Douglas would once again have the luxury of playing many of his reserves and underclassmen who certainly benefited from the experience of another high level playoff game. Outright confidence was a big factor in deploying many of his talented back-up players to secure the victory. The final scoreboard would read, Narbonne 56, Paraclete 14.

Now it’s on to Sacramento St. College this Saturday, 12/16/17 for the State 1-A Championship where the Gauchos will confront their Northern California counterparts, the Pittsburg Pirates  Kick-off is set for 4 pm. The game will be aired on SportsNetLA.  By: Rico Cabrera, Sr./Editor, East L.A Sports Scene