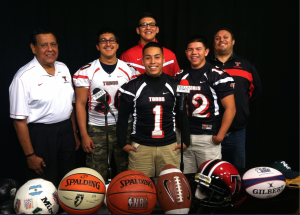 Join us in our annual recap of our local high school football programs, on this occasion, we highlight the Esteban E. Torres “Toros.” Head Coach, Peter Cuevas brings four of his five All-City selections to our studios for an in-depth look and acknowledgement of the team’s and the players’ historic and outstanding performances. Coach Cuevas will have three of these All-City performers back for next season in Juniors, Jose Munive/RB, Giovanni Gonzalez/OL, and John Gonzalez/DE. Also appearing on the show is Julian Munoz, a three year starter, and All-City 1st Team Defense selection as a Middle Linebacker. Absent, but accounted for by Coach Cuevas, was David Frontanez who made the All-City team as a Punter. David’s talents will be greatly missed not only by Coach Cuevas, but by his baseball and basketball coaches as well. Stick around and watch a very informative program about our young athletes, their Head Coach, and their high school. Prep football is back on-line via East L.A. Sports Scene!