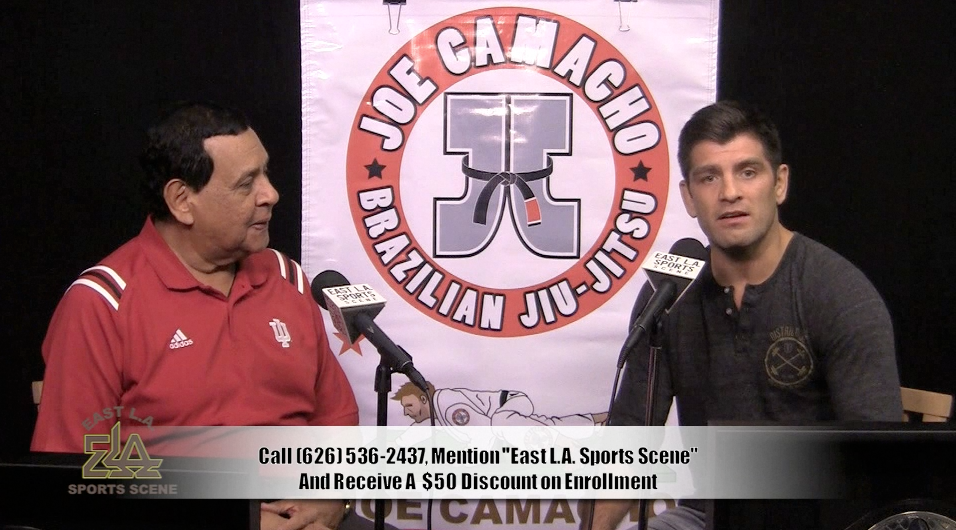 EN MEMORIAM: It is with great sadness and the heaviest of hearts that we must inform all viewers of this Posting that Joe Camacho passed away this past weekend, (December 15th). As a fitting tribute to his life and legacy we will keep his memory alive with us by keeping our program online and available to those who were impacted and befriended by Joe during his brief but powerful lifetime.  East L.A. Sports Scene recently invited Joe Camacho, Brazilian Jiu-Jitsu Academy owner and combatant on the upcoming November 2, 2013 Bellator Mixed Martial Arts Fight Card, to come into our studios and give all of his fans an update on these two very important events. In the first instance of the progress being made  in his recently opened Academy, located at the District 36 CrossFit Facility, 453 Colyton St., L.A. CA 90013, listen to Joe as he provides us with his update. In addition, Joe brought one of his current students to add personal testimony to the values and positive changes that he has benefited from, by his enrollment in Joe’s Brazilian Jiu-Jitsu Academy. Lastly, listen to Joe give important details on how his supporters can assist him in this upcoming bout with his opponent, Cleber Luciano of Brazil. The Bellator MMA action card takes place on Saturday, November 2nd at the Long Beach Arena. The main event will feature Tito Ortiz vs. Rampage Jackson in the featured Light Heavyweight bout of the night.