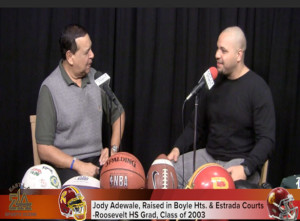 Returning to Boyle Heights and East L.A with a flourish, is former USC “Trojan” and Roosevelt “Rough Rider” football great, Jody Adewale, on this edition of East L.A. Sports Scene. The pride of “Rider Nation” spends quality time with us as we pick up his story several years after he has earned his Bachelor’s Degree in Psychology, his Masters Degree in Marriage & Family Therapy,  both from USC, and his Ph.D. in Clinical Psychology from the California School of Professional Psychology in San Diego. We invite you to watch and listen as Jody gives us some new and keen insight into his time spent on the National Championship USC Teams, his great mentors in Coach Pete Carroll, and his Head Coach at Roosevelt, Jose Casagran. Jody also gives us a glimpse into his future by sharing his professional career goal of opening his own Sports Psychology Clinic in East L.A. Come along and catch up to this amazing young man and his vision for our community.