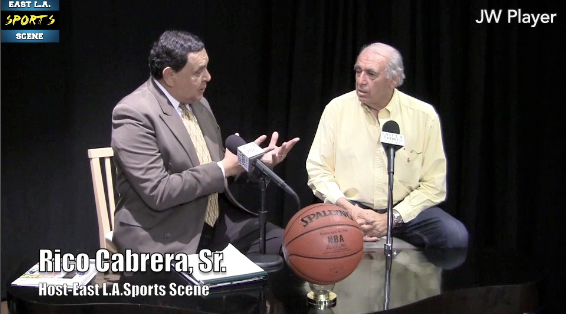 The descriptive phrase “Living Legend” can certainly be applied to the special invited guest on this in-studio program produced in March of 2011. Coach William “Bill” Sanchez, born and raised in Boyle Heights, was a graduate of Cathedral High School, became one of our  country’s first Mexican-American All-American selections at St. Mary’s University (Northern California) in the mid-1950s, and eventually a highly successful Head Basketball Coach at Loyola High School during the decades of the 60s and 70s. After leaving the coaching ranks, he remained on its teaching staff, and amazingly some fifty years later, having celebrated a Golden Anniversary, continues his life-long profession at this well-renowned, Jesuit College Preparatory High School, located in the heart of the City of Los Angeles. We invite you to spend the next thirty minutes to see why he deserves the opportunity to share his unique playing and coaching careers that covered several generations of time. His valued mentorship skills have positively impacted the lives of thousands of Loyola High School student-athletes. He is definitely on our list of “All-Time” greats that are from our  community and will be inducted into the future East L.A. Sports Scene “Hall of Fame.” One of Coach Sanchez’s college playing highlights came during the seasonal match-ups against the University of San Francisco’s All-Amercian players and NBA legends, Bill Russell and K.C. Jones.