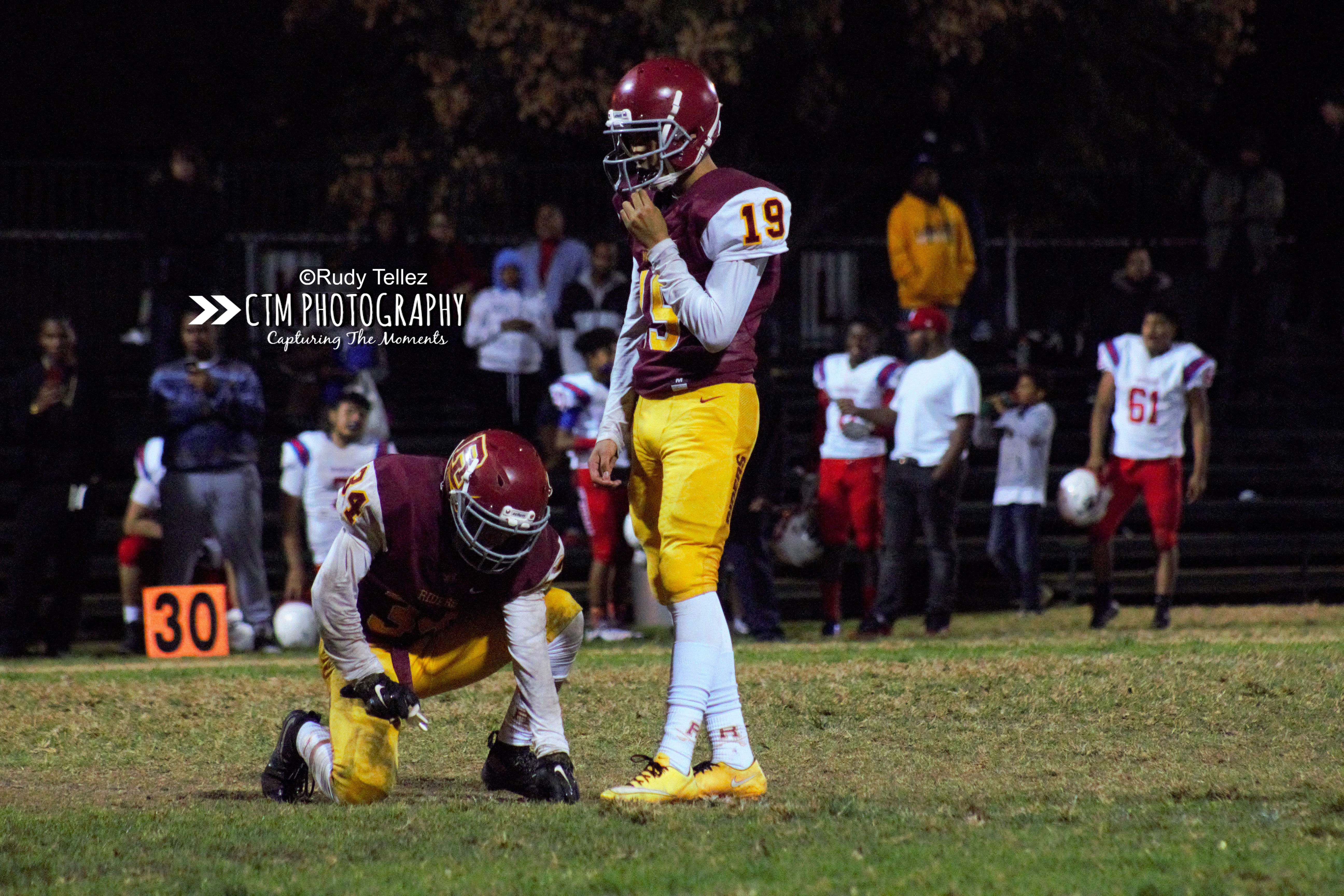 A warm, Fall & High School Football Playoff Greeting To All of our Followers, especially to those of you who are proud members of “Rough Rider Nation.” We definitely bring you a very different version of our 11th “Game of The Week.” Instead of a “Play-By-Play” account of the game, we offer it to you in the form of a write-up and a photo gallery. By Rico Cabrera, Sr./Editor, EastLASportsScene.Com

We chose the Roosevelt  vs Washington Prep game because of the “competitive equity” game aspect as explained by CIF/L.A. City Section Commissioner, John Aguirre, in his pre-season interview with East L.A. Sports Scene (To view it, click here). At that time, he described the efforts that he and his Office were taking to bring about a more balanced and competitive playoff format. The creation and addition of the new “Open” Division was one the biggest difference makers in this year’s draw. At the end of the new day, an additional eight teams would be eligible to make the playoffs.

Having said that, the Roosevelt Rough Riders (5-5) located in Boyle Heights, earned themselves a #7 seed and their first appearance in an L.A. City Section playoff game for the first time since 2014, when they played San Pedro. On the other hand, the Washington Prep Generals (3-7) were given a #10 seed. In addition, the Generals, came prepared for battle under the legendary and former Dorsey HS & L.A. City Schools, Head Coach of the Year, Paul Knox, who was no stranger to these types of playoff games. And so, the stage was set for one of the most dramatic 1st round playoffs in this year’s Division II bracket.

Brief Game Summary: The Generals quickly established their ground game in the 1st quarter and scored first on a 33 yd. run. The Riders would counter with their 1st TD  when they punched it in from the 2 yd. line just a few minutes later. The score was then tied at 6-6. In the 2nd quarter, both teams were finding their rhythms. The Generals next scored on a 2 yd run, moving the score to 12-6. Washington Prep’s third scoring run was a 96 yd. electrifying carry with under a minute left to play in the half. However, the Riders had other ideas and they struck right back with their second TD, via a 10 yd. pass moments before the clock ran out for the 1st half. The PAT was good, and moved the score to 20-13, Washington Prep. This would be the halftime score.

The second half would belong to the Rider offense as well as their defense. They used their air, ground and pound run game utilizing a combination of slants and swings that propelled them to a TD at the 7 minute mark of the 3rd quarter, which moved the score to 20-19, still in favor of Washington Prep. From that point on, the game was riding on the strength of the Roosevelt defense, which held.

Then as the game clock was running down and crunch time was on, the Generals  were stopped quite short of a crucial first-down that was badly needed to maintain possession and run out the clock. It was then that Coach Zepeda’s unflinching defense rose to the occasion and forced the Generals to punt. With this greatly needed possession, the Rough Riders would show their seasoned and accomplished game-ending skills with their version of the “Under 2 Minute” drill which they ran to perfection. The goal, with just :13 seconds remaining, was to set-up #19, Josue Lopez/SO, for a game-winning field goal attempt. The rest is now history as he drove the ball straight through the uprights, finally giving the Riders the lead at 22-20. Thus, with just :10 seconds left to play, the Riders had to kick-off one last time. Coach Zepeda called for his prevent special team to secure the win with a sure tackle on the return. And tackle the Riders did, as they secured themselves a trip to the Division II Quarterfinals, set for this Friday, 11/17/17. They travel to Huntington Park and take on the Spartans for the second time in just 3 weeks.

As Coach Zepeda stated in his post-game comments: “This was a great team win. Every player played hard for his teammates and everyone stayed focus on their roles and responsibilities. I prepared the team by telling them that Washington Prep, despite its record of 3-7, played in a very strong league, and if we limited our mistakes and our penalty yards in the game, that we would have a good chance of winning.” Coach Zepeda gave tremendous kudos and props to his defense for shutting down the dangerous Washington Prep offense in the second half which was one of the keys to his Riders’ victory. And lastly, as Coach explained his game plan to me, “we literally stacked the box on defense and used a three-back rotation to give our offense a number of successful multiple sets to work from.”

Regarding Friday’s game vs. Huntington Park, Coach had this to say, “I told them that HP is going to be ready for this rematch, and that we must focus on them in a much different mindset if we are to defeat them twice in a row. It won’t be an easy task although we defeated them 28-18 in league play. This will be a whole different situation and I expect a very tough and hard-hitting game.”