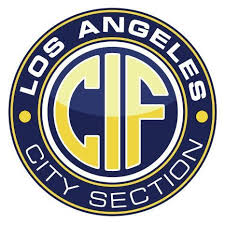 [Note From The Editor] In case you missed the “Live Stream,” last Friday on the NFHSNetwork.Com, you may still see the game on their Video On Demand (VOD) feature, by clicking on the link inside of the video below and then subscribing.

(Boyle Heights, East L.A.)—[Game Summary] In their “Live Streamed” 1st round Division I playoff game, the #7 seed Roosevelt Rough Riders woke up from a deep-sleep late in the game vs. the #10 seed Cleveland Cavaliers from Reseda, CA. The Riders were powered to another tremendous “come-from-behind” win by several big-play artists of this crucial game, #24/SR/Punter-Placekicker/Luis Nolasco, #5 QB/SR/Andres Flores, and their All-Eastern League and probable All-City player, #8/DB-RB/SR/Angel Ochoa.

This offensive trio provided the difference in their comeback victory over the Cavaliers. And, to include the defensive “down in the trenches D-Line“ made up of #10/Ruben Castillo, #44/Alek Rojas, #9/Josue Lopez, and #23/Alfredo Sepulveda, plus the rest of their grizzled unit, the Riders stuck together before a packed house made up of their devoted student-body members, family, parents, classmates, and supportive community members, as they showed amazing grit and determination in overcoming two Cleveland leads very late in the game.

Nolasco showed his timely value with his successful “on-side” kicking specialties, his third of the game, coming after a 4th quarter TD by Cleveland that moved the score to (19-14) in their favor. With the recovery and barely 3 minutes left in the game, the Riders marched down the field after 2 huge plays by Ochoa that put the ball at the Cleveland 20 yard line. Then, on a perfectly executed QB bootleg left, Flores picked up the badly needed 1st down at the 10 yard line. After a couple of carries by Ochoa, the ball was advanced to the 2 yard line with 3rd and goal. On the next snap, Ochoa was able to punch it across the goal line for the TD as he went over the agile left side of his “O” Line. This was Ochoa’s 3rd rushing TD of the game that moved the score to (20-19), Riders. To close out the Riders scoring, Nolasco came on and then expertly kicked his 3rd PAT for a (21-19) lead with just :43.7 seconds remaining in the game.

However, with very little time left on the clock, the Cavaliers would have one more shot at trying to overcome this last minute surge by the Riders. With just :37 seconds left in the game, Cleveland started their final possession of the game at their own 45 yd. line. They ran one play that moved it to the Rider 45 yard line. Then the Cleveland Head Coach, Scott Faer, put his game starting #20/QB/Gabriel Juarez back in for a “quick strike” passing play. But, right at the end of it, DB-QB/Andres Flores perfectly timed his jump to intercept the pass at the 10 yard line, and with that, it would end the Cavalier hopes of a comeback and an upset. The Riders simply ran out the clock and took a Victory Formation to end the game.

NEXT UP: The Rough Riders will travel to the San Fernando Valley to play the #2 seed, Reseda Regents (7-3) and #2 finisher in the Valley Mission League, behind the Champion, and undefeated San Fernando Tigers (9-0), who are playing in the “Open” Division as the #1 seed. The Regents have won their last four consecutive games. The game is set for Friday, 11/15/19 with kick-off set for 7 pm.