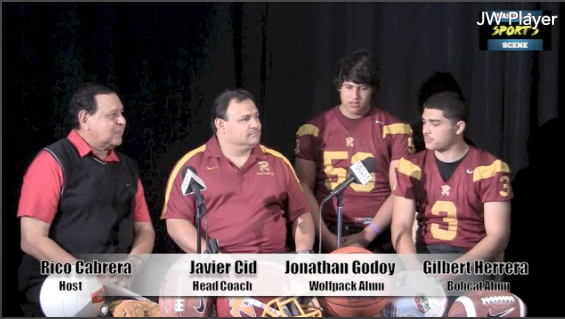 East L.A. Sports Scene once again brings much deserved attention to the Roosevelt “Rough Riders” football program. We are extemely pleased to bring you this special “In Studio” program with the two All-City players from the highly successful Rider 2012 team, (8-3 Overall Record and a first Round Playoff game vs. Carson). We cordially invite you to watch our Exclusive interviews with Head Coach, Javier Cid, and his two Seniors, Jonathan Godoy, (named to the First Team Offensive Unit as a Lineman), and Gilbert Herrera, (named to the Second Team CIF All-City Defensive Unit as a Corner Back). Right in the middle of the action, as he usually is, listen to what Coach Javier Cid has to say about his twin selections to the Division 1 All-City Teams. He also provides us with a recap of last season and quick peek into the upcoming 2013 season. It’s always a very proud moment when our student-athletes receive these types of awards and acknowledgements from the CIF’s City Schools Division.