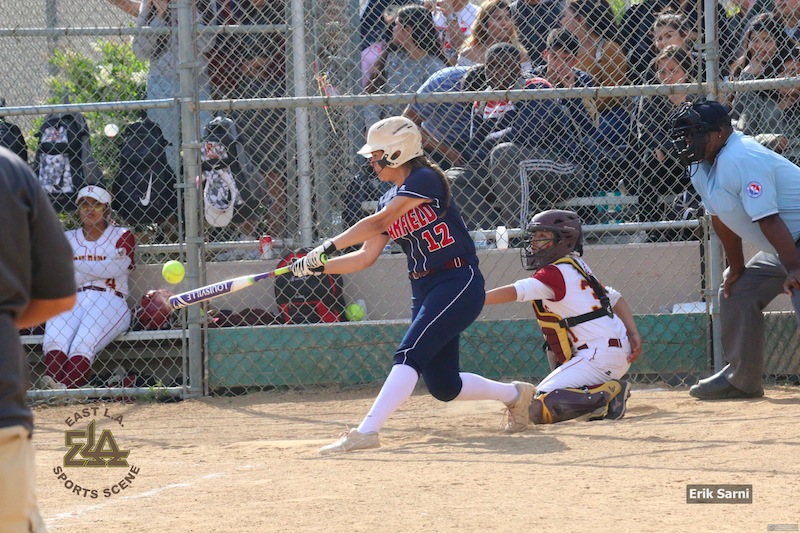 Note From The Editor #1: When it comes to rivalries, the Garfield vs. Roosevelt match-up in any sport suddenly takes on a whole new meaning and a tremendous pride factor. Just ask the Lady Bulldogs that question and you’ll receive a reply that will amaze you. In what has been a good winning season for them, and not a title-winning one, Garfield beat the odds as they traveled from the eastern side of East L.A. on May 15th to its western side and arrived in Boyle Heights to take on the Lady Riders in their quarterfinal playoff. It was a #3 seed versus a #6 seed. After 7 innings of play, the final score on the scoreboard would read Garfield 12, Roosevelt 5. And with that, the Lady Bulldogs would earn the right to advance in the tournament and prepare to face Hamilton HS, this time in the most-coveted semi-final game.

The result of that semi-final game can be found here in Note From The Editor #2: Garfield advanced to the third round of the Div. II softball tournament only to be edged out on the road by the #2 seed, Hamilton HS on Wednesday, May 17th. The final score was 2-0.

Roosevelt Game Summary (QuarterFinal), May 15th:  The game was close through the first five innings with the score reading 3-2 in favor of Roosevelt. However, the Lady Riders defense uncharacteristically became unhinged and allowed Garfield to score a mixture of both earned and costly unearned runs in their half of the fifth inning. With that amount of damage done, the victory was pretty much clinched for the visitng “Lady Bullodgs.” The upset was thus complete and went into the record books as a huge upset win for the #6 seeded team. To see some of the game action in pictures taken by Erik Sarni for EastLSportsScene.Com, please take your time to browse through as many as you can. Once you’re finished, please share our posting as widely as possible with all of your special networks. Thanks in advance!

And now as we close the high school softball chapter for 2017, we at EastLASportsScene.Com, once again offer our esteemed Congrats to both of our East L.A. high schools and softball teams who wore their uniforms proudly each and every time they were called upon to do so. At the end of the day and the season, we salute Coaches     Javier Carbajal (Roosevelt) and Alex Oropeza (Garfield), their outstanding student-athletes, their athletic departments, their student bodies, their parents, and our supportive communities for being there whenever spirit and support were needed. As a final note to this season, we take time to acknowledge the tremenduos efforts by the Torres “Lady Toros” who also reached the softball semis in the L.A. City Schools Division III. Good luck in the off-season to all three of our East L.A. teams and we hope to see you all back in next year’s tournament.  Rico Cabrera, Sr./Editor, EastLASportsScene.Com

Gallery Viewing Tip: Click once on any image to see photos in slide show format.