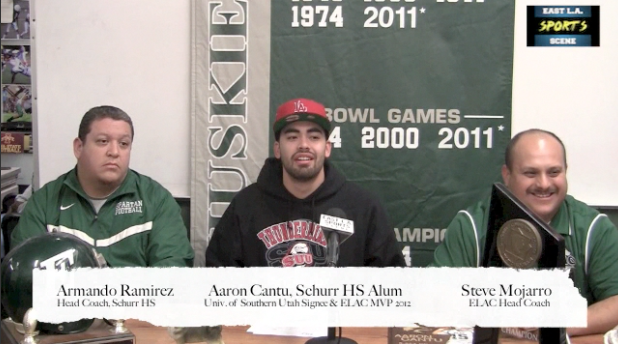 Watch this very special “Moment in Time” for four ELAC players as they signed their scholarship agreements with Head Coach, Steve Mojarro, family members, and friends all looking on. Early January marks the occasion for players to sign their offers, thus enabling them to begin their matriculation process immediately, rather than waiting for the regular Fall registration period. Witness each player sign his agreement and listen to Coach Mojarro’s noteworthy comments, as well as hearing each player’s comments. The first student-athlete to sign was Justin Soriano. He will attend Bellhaven University, located in Jackson, Mississippi. The second to sign was Daniel Davis, an L.A. Wilson alumnus who will also attend Bellhaven. The third was Aaron Cantu, who selected Southern Utah University. Cantu’s season statistics will propel him into ELAC’s record book with these eye-catching totals: 3,358 total yds passing; 32 touchdowns; 435 attempts; 62.3% completion rate; and an average of 373.1 passing yds per game. The final member of this year’s team to sign was Sean Acuna. He is proudly heading to the University of Western New Mexico. As an extra added attraction, Caesar Aguila, who was home for the Christmas and New Year holidays, had the opportunity to account for himself as a Junior/LB-DE who played this past season at Bellhaven University.