(South Los Angeles)—One of the most historic and memorable dates in the L.A. Clippers franchise occurred at 12 noon on a very hot summer day, 7/24/19, at the L.A. Department of Recreation & Parks, Green Meadows Recreation Center. It was the epicenter for the introduction of the NBA’s “Two Best”-“Two-Way” Super Stars, Kawhi Leonard and Paul George to the media and the public, as the gym was filled to capacity with at least 100 youth, both boys and girls, several leading community members, and local political representatives. The appreciative youth were immediate, and glad beneficiaries of the Clippers tremendous outreach commitment of refurbishing and/or renewing gymnasiums and outdoor courts, at over 350 recreation centers such as Green Meadows. It was also estimated that nearly 50 media outlets were in attendance to view every second of the press conference and the post-event activities which we will tell you about shortly.

Note From The Editor: You are encouraged to watch the Press Conference along with the media Question & Answer session that immediately followed. In addition you can view our Photo Gallery, see the unveiling of the World-Class Mural of both players, watch an interview with a local community and lifelong young Latino Clippers fan, Carlos Arroyo, and finally, enjoy our “Exclusive” interview with Clipper Darrell, one of the most recognized professional and iconic sports team fans anywhere in the world. The entire press conference can be seen, minus the Fox Sports Interactive Media copyrighted exception of the :45 second promo highlight reel of the players, which occurs at the 14:45 minute mark.

In a momentous decision that took the NBA hierarchy and many of the major media organizations by surprise, the Clippers, (who as some experts say, are now a predicted NBA Finalist), led by Steve Ballmer and his Leadership Team, managed to accomplish one of the most successful multiple player “off-season” signings in the persons of the most dynamic duos currently lavishing in the stardom of the world’s elite —#2 Kawhi Leonard (2 x NBA Finals MVP/2 x NBA Champion/3 x NBA All-Star/2 x All-NBA First Team) and his good friend, #13 Paul George (6 x NBA All-Star/2019 All-NBA First Team/2019 NBA steals leader/2× NBA All-Defensive First Team/4× All-NBA Third Team). Both players are no strangers to L.A. and Southern California, with Leonard having attended Martin Luther King HS in Riverside and then enrolling at San Diego State, while George attended Knight HS in Palmdale, (Antelope Valley), and then went on to play his college career at Fresno State College. 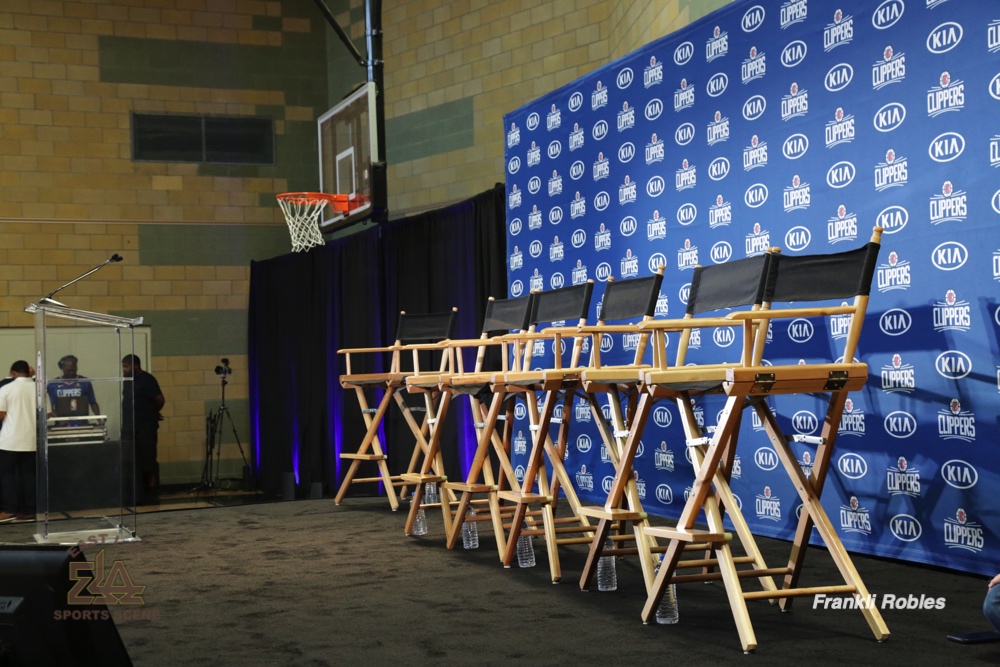 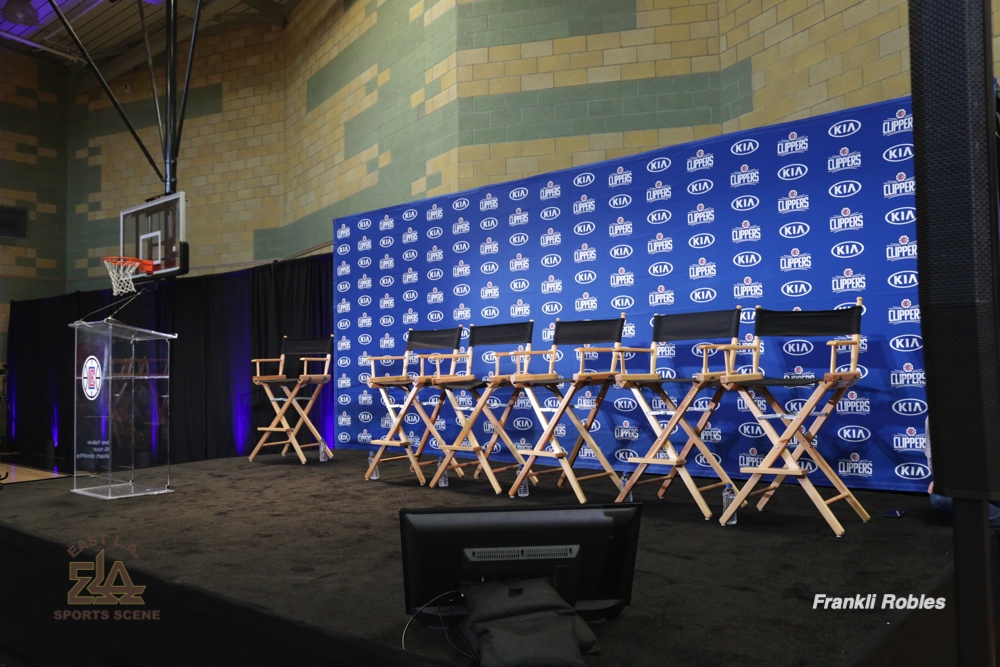 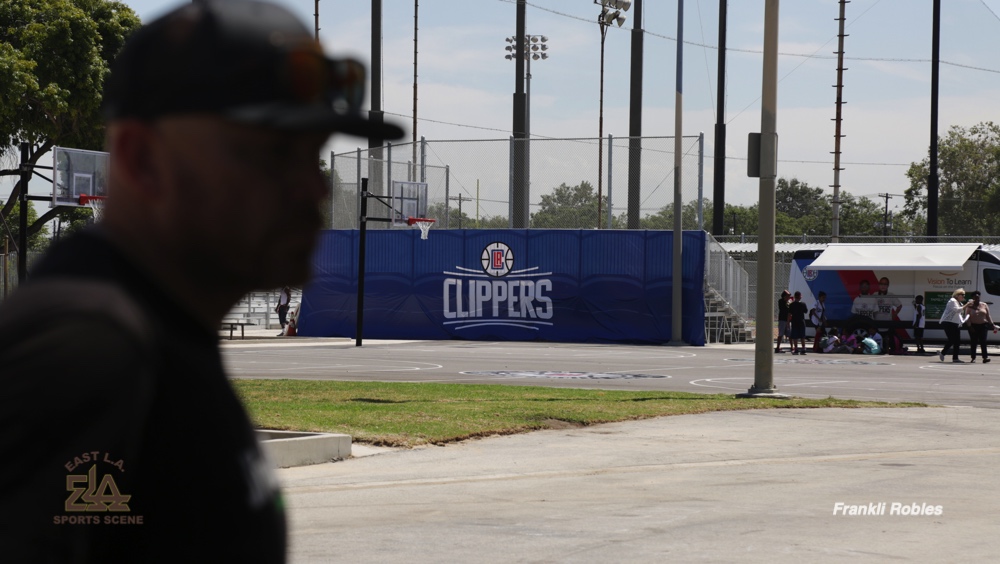 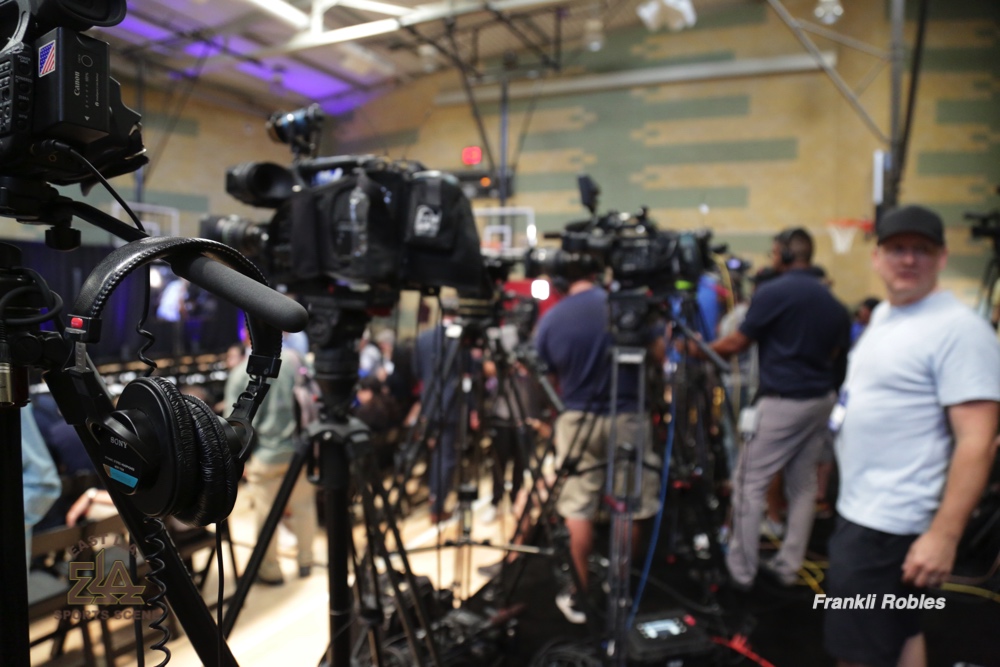 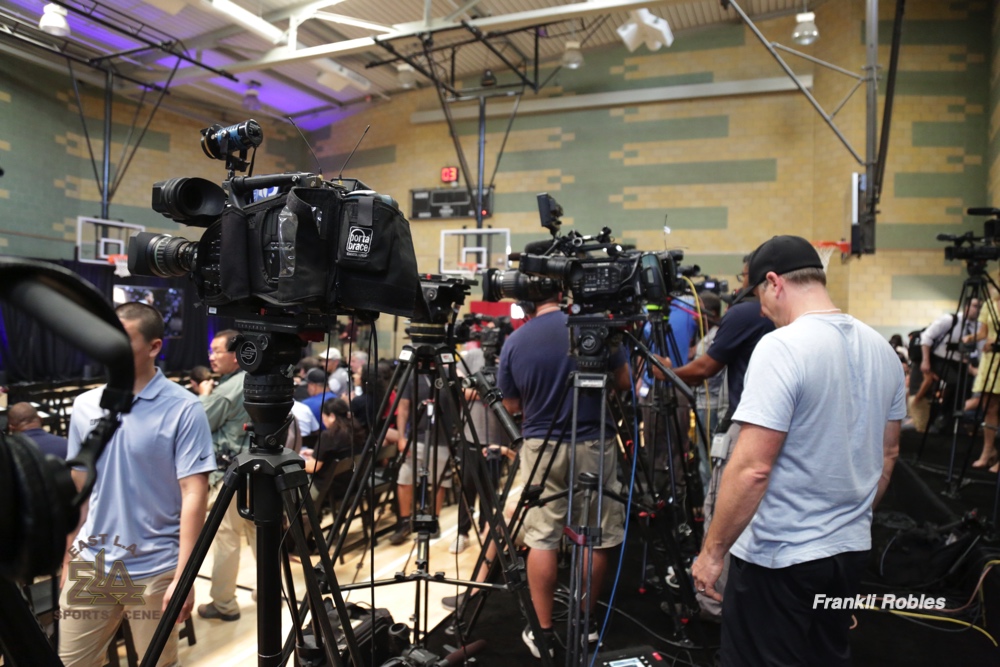 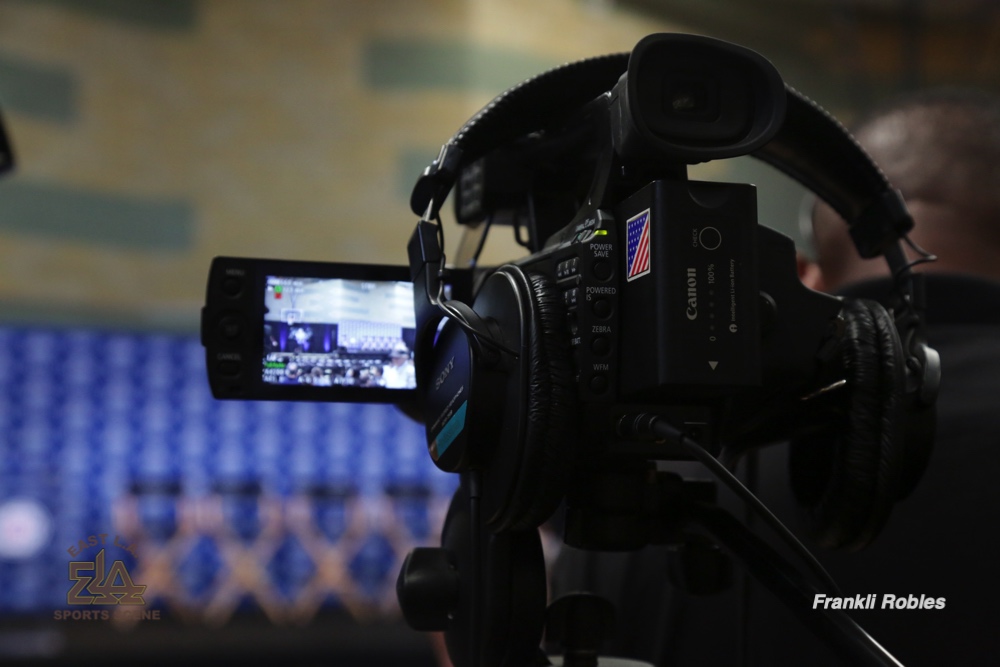 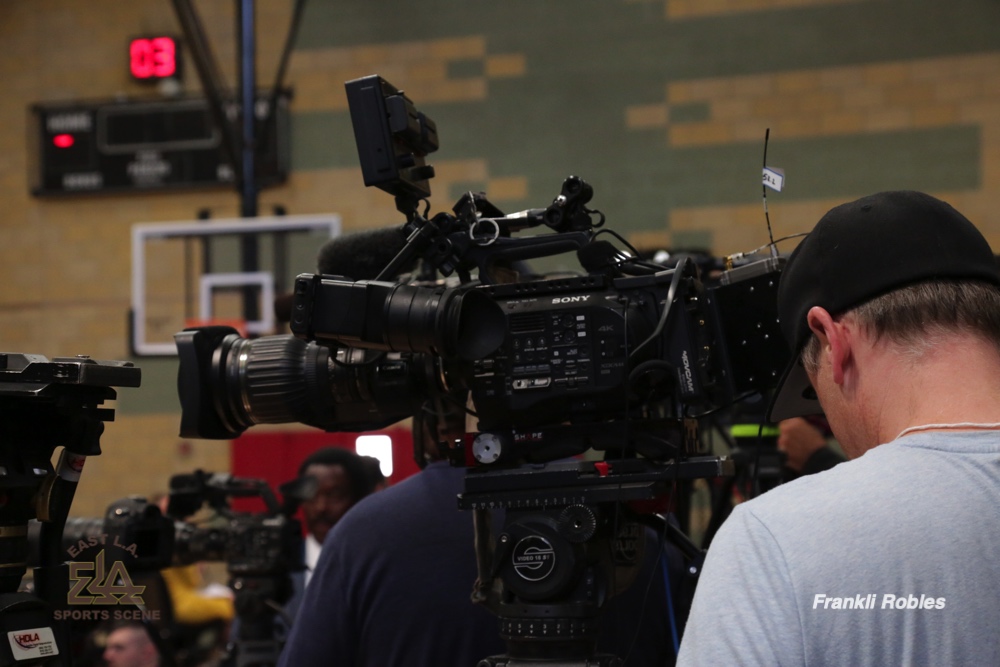 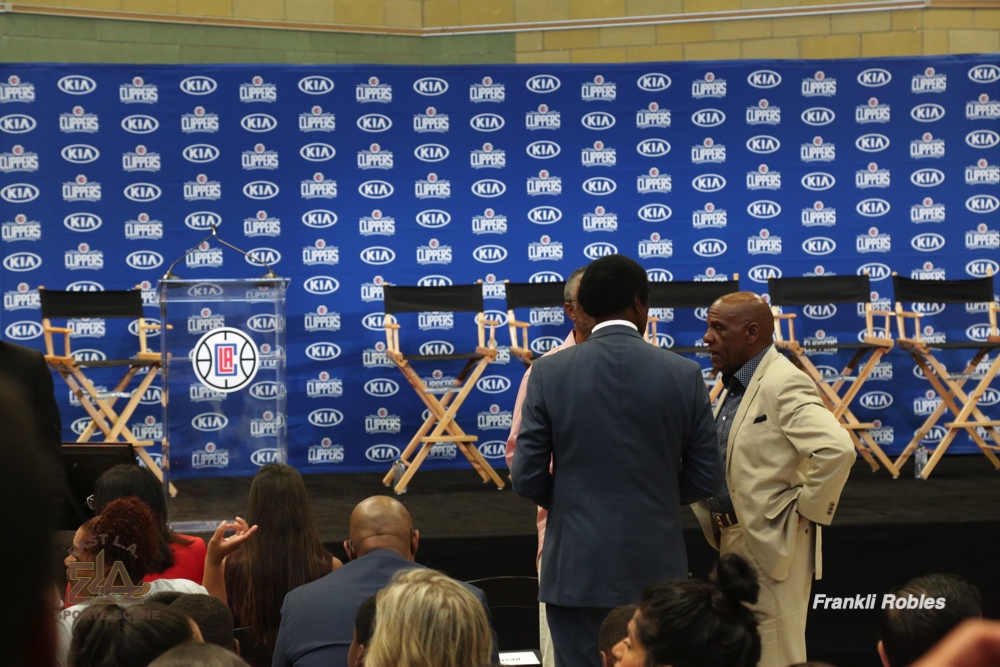 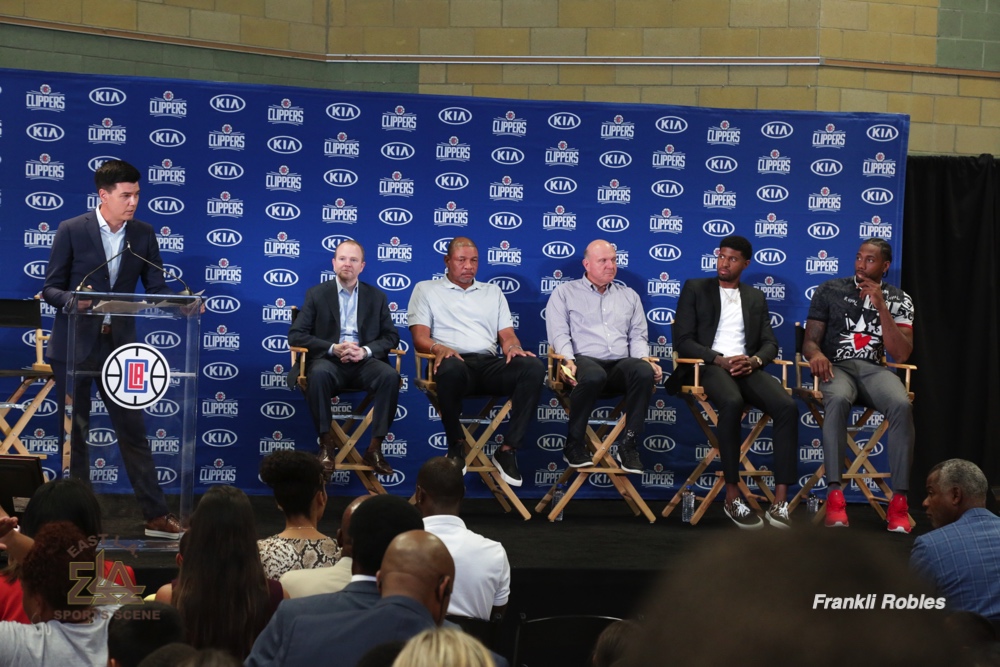 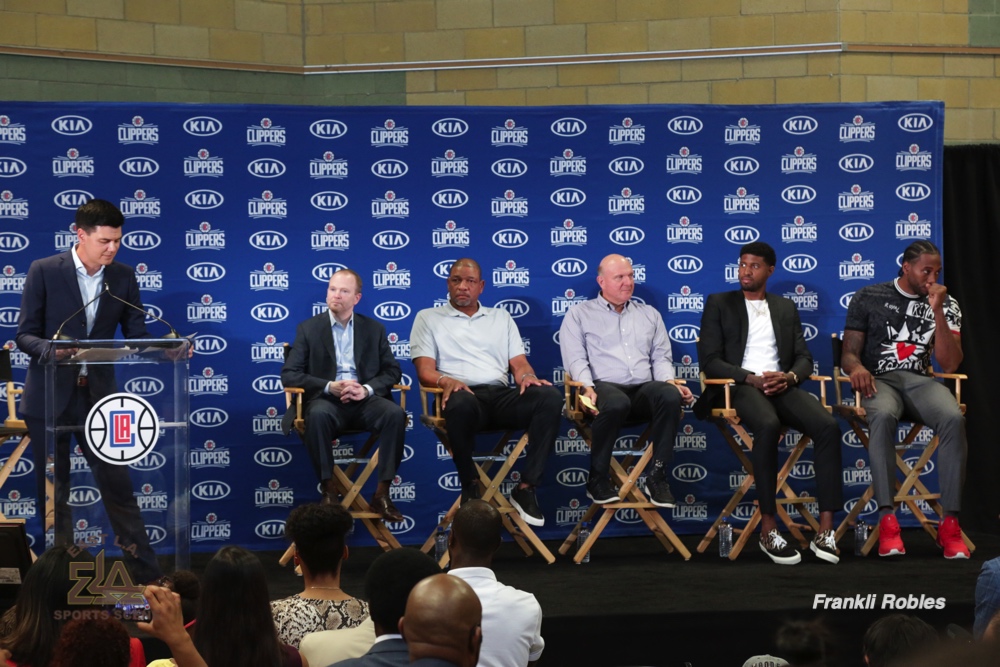 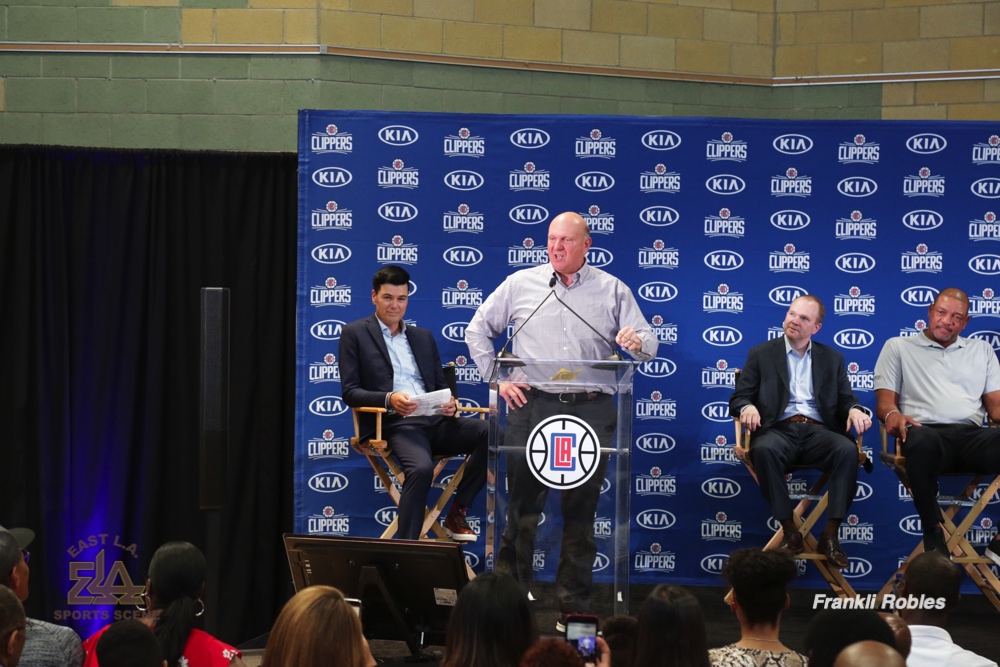 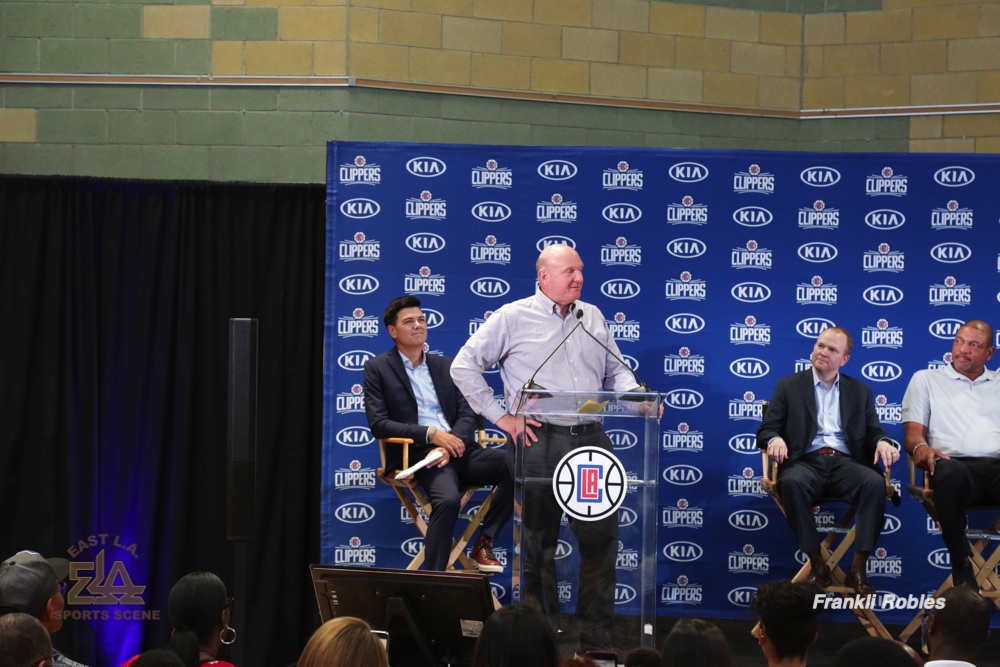 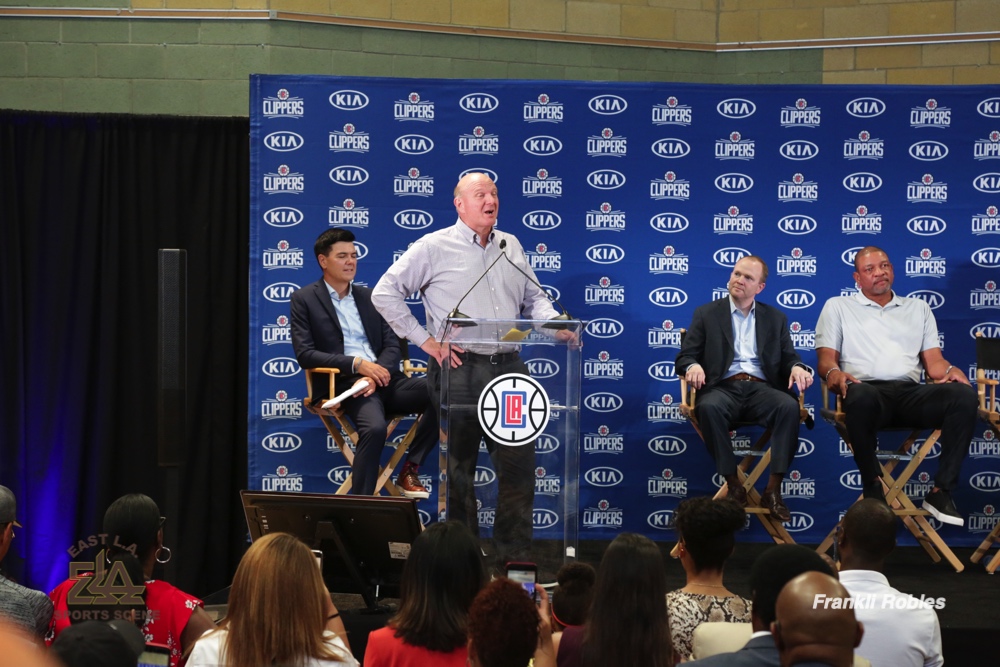 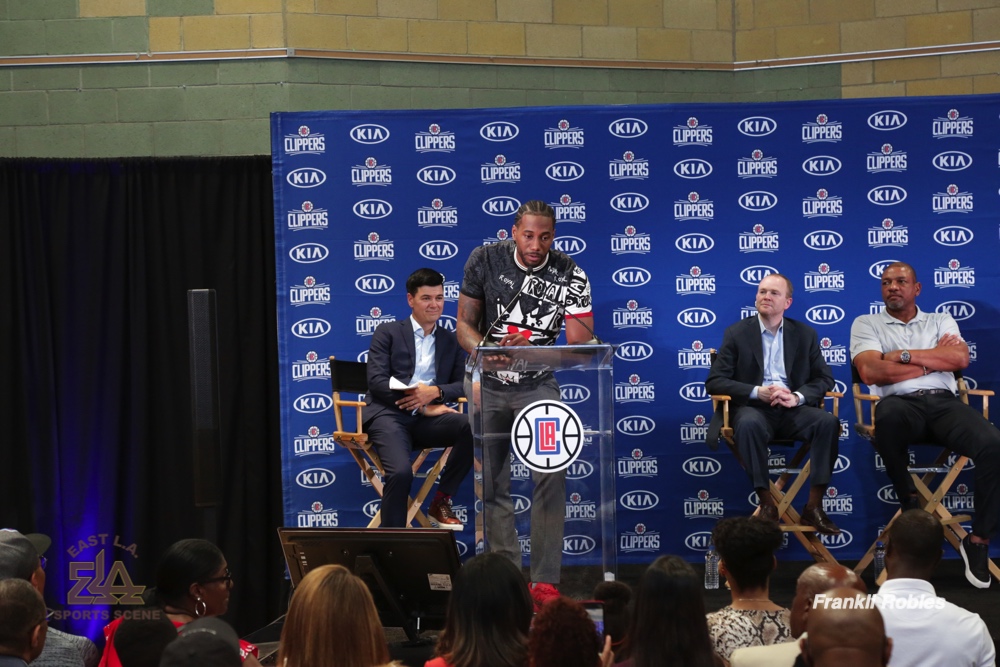 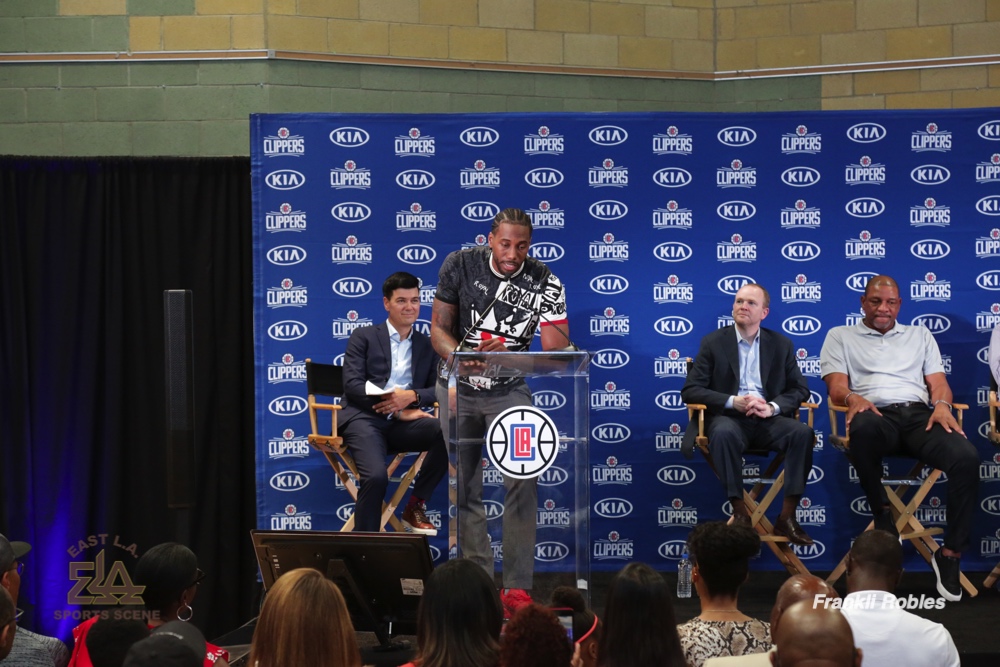 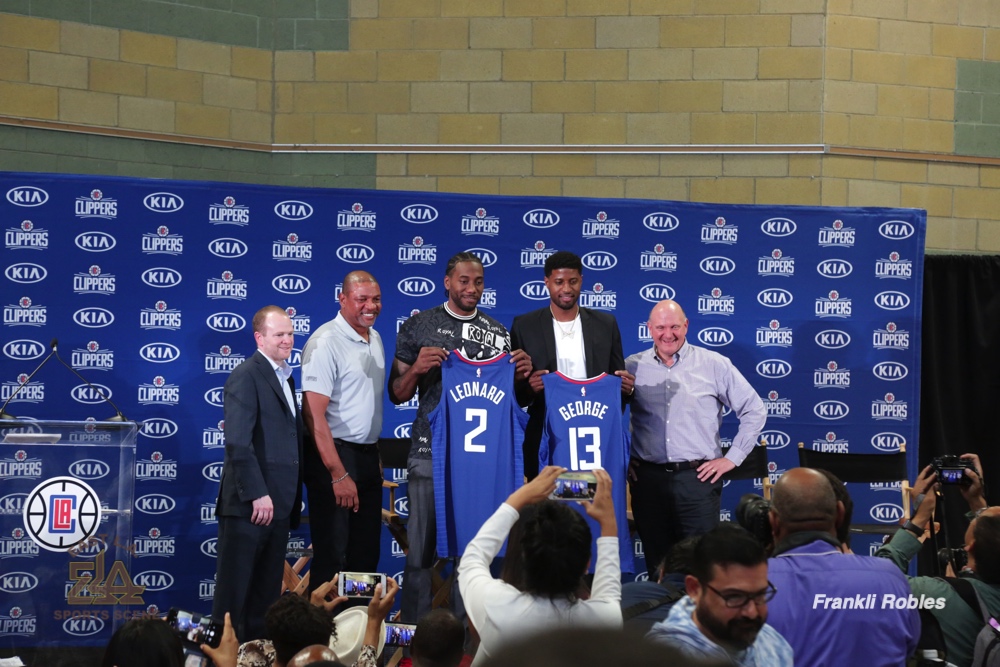 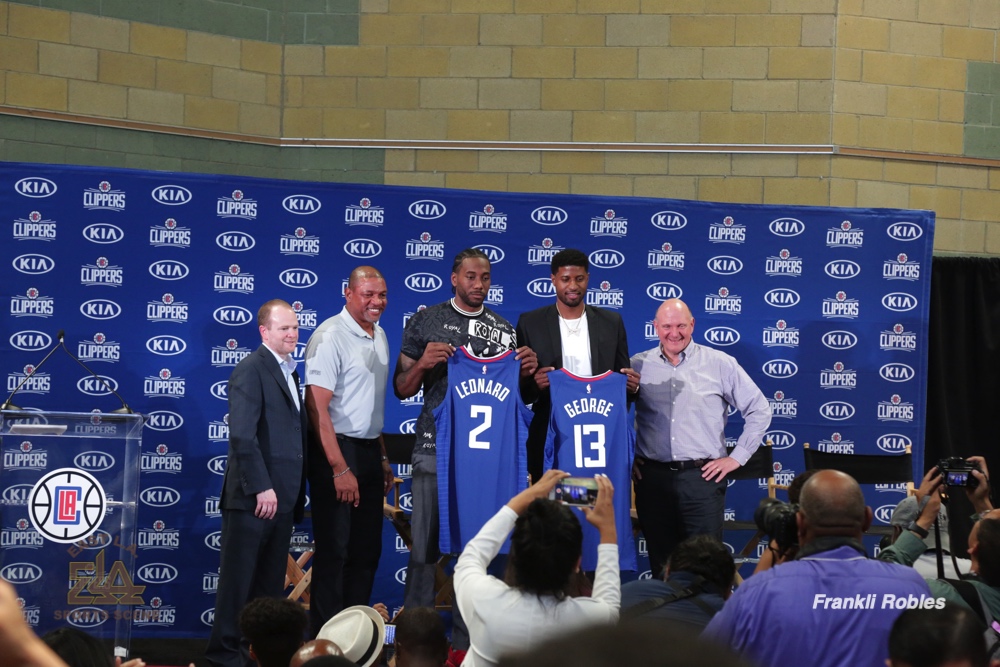 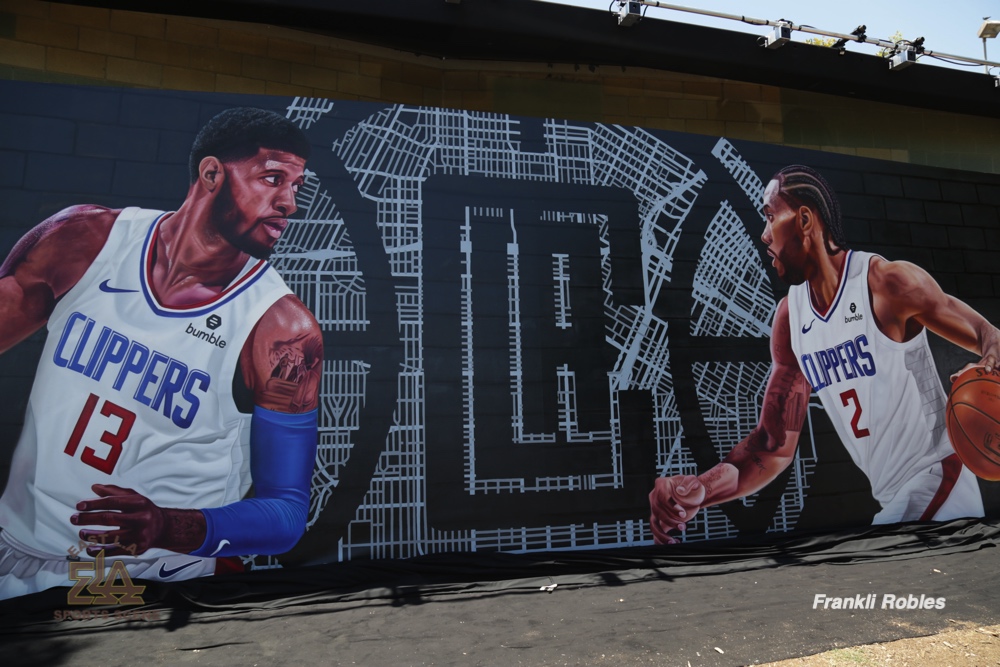 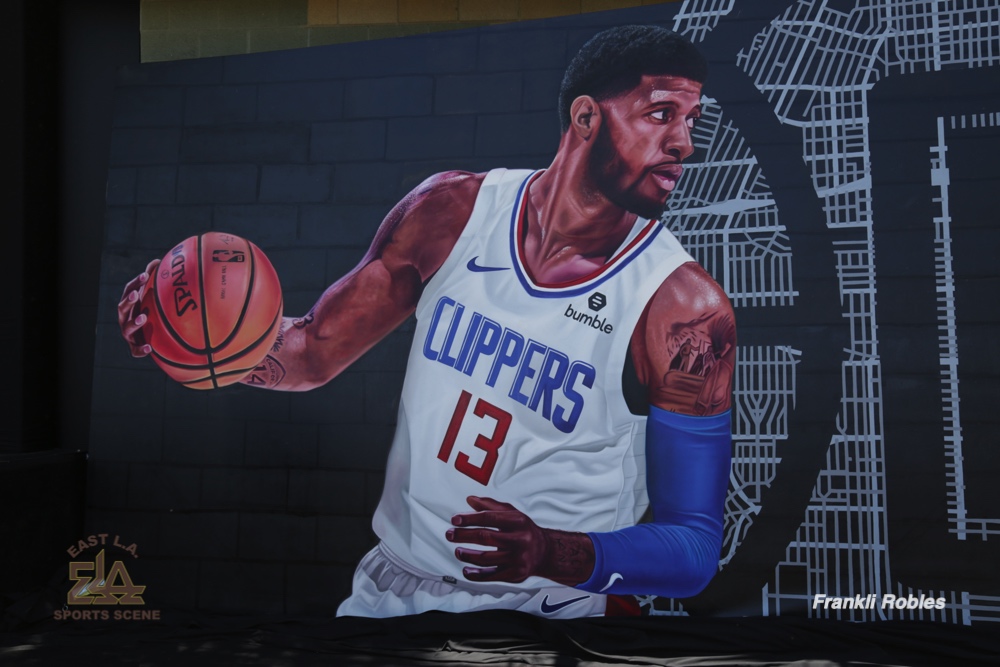 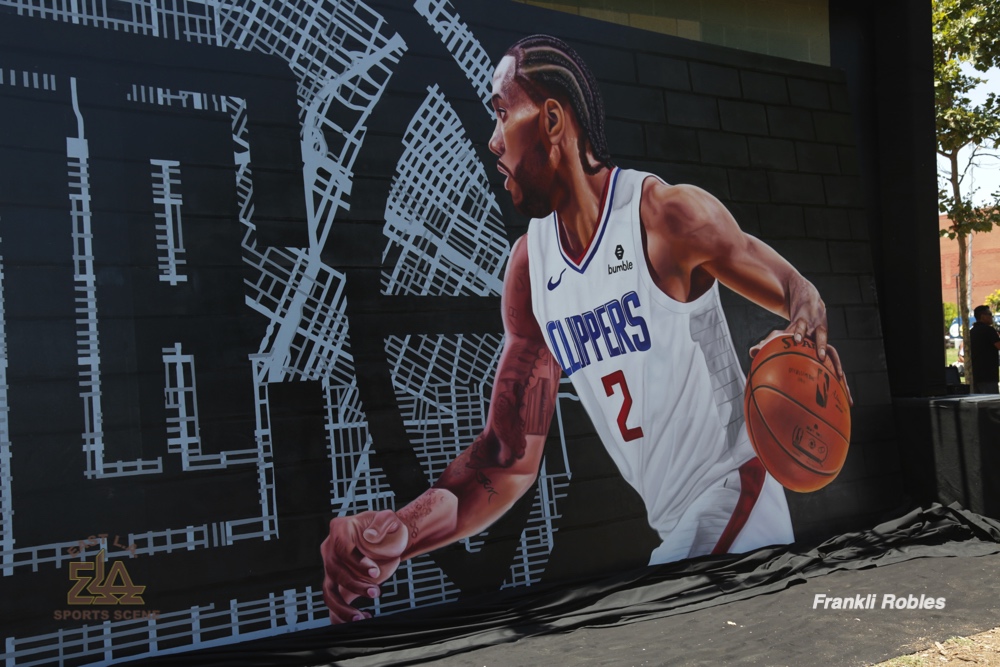 The extremely comfortable niche-fit in coming to the Clippers  for both players was quite compelling, as it was natural, since their families are residents of L.A. and Riverside.

After the press conference all media groups were ushered outside to a special occasion resulting in the unveiling of a tremendous mural that dynamically showcased both players as larger-than-life Clippers. The permanent location of the mural, whether inside the Green Meadows Clippers Community Court, or near the outdoor basketball courts, has yet to be finally determined. The mural was commissioned by the Clippers and produced by muralists, Daniel Antello and Sergio Ramirez of Collosal Murals, a Los Angeles-based company.

After competing their house-hunting chores, the next phase of the players new journey calls for them to get ready for the Clippers 2019 NBA Training Camp and begin their bonding with the rest of the squad and all of Doc Rivers’ Assistant Coaches, Sam Cassell, Rex Kalamian, and Armond Hill. The entire team will also be under the watchful eye of NBA Legend, Hall Of Famer, and current Clippers Consultant, Jerry West.

As Lawrence Frank, Clippers President of Basketball Operations, stated in his presentation, the team pursued both players because of their “toughness, hard-play and drama free” approach to the game. He also explained that the acquisition of Paul and Kawhi was made possible in large part by their “stocking a big number of draft picks,” and finally closed by saying that they were “pursued because they fit so well together.” Head Coach Doc Rivers stated that he preferred to describe his squad as a “Black-Top” team which will win many games this coming season, but it’s their ultimate goal to win the 2019-2020 NBA Championship. Lastly, team owner, Steve Ballmer showed his delightful and highly infectious enthusiasm on introducing the players as “Los Angeles Clippers,” praising them as outstanding, and tireless workers on their games.

At the conclusion of the historic day’s Press Conference, Paul George, aka “Young Trece” —translated–“Young 13” , summed it up very well  to all in attendance when he briefly, and to the point, proclaimed,  it’s going to be……“L.A. Our Way!”