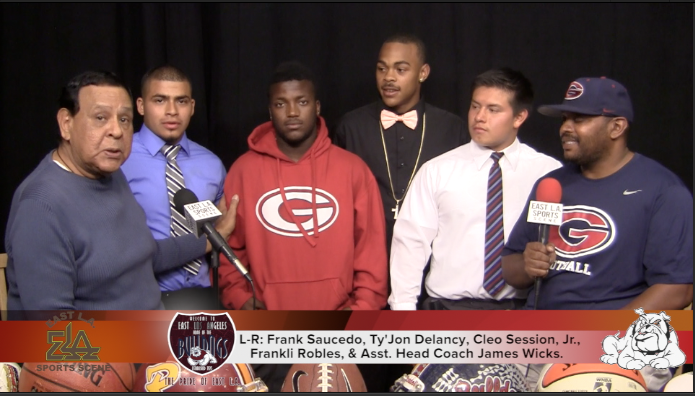 As we move through our annual post-season coverage of each High School varsity football program covered by East L.A. Sports Scene, we bring the Garfield “Bulldogs” to center stage. In Head Coach Lorenzo Hernandez’s absence, due to an unexpected work-related emergency, the players were led into the Studio by Assistant Head Coach and Defensive Coordinator, James Wicks. Rico sits down to talk about the state of “Bulldog” football with the Coach and four outstanding players who made a huge difference in a highly successful season in 2013. Take a look and listen to these accomplished and well-seasoned student-athletes: Ty’Jon Delancy/RB, (All-City/1st Team), Cleo Session, Jr./WR-SS, (All-City/2nd Team Offense), Frankli Robles/FB, (2nd Team All-Eastern league) and Frank Saucedo/LB (2nd Team All-Eastern League). With the exception of Senior, Delancy…Session, Robles, and Saucedo will all return as the core of the “Bulldog” team in 2014. We encourage you to watch and learn during this very informative program. High School football is returning full-time shortly.