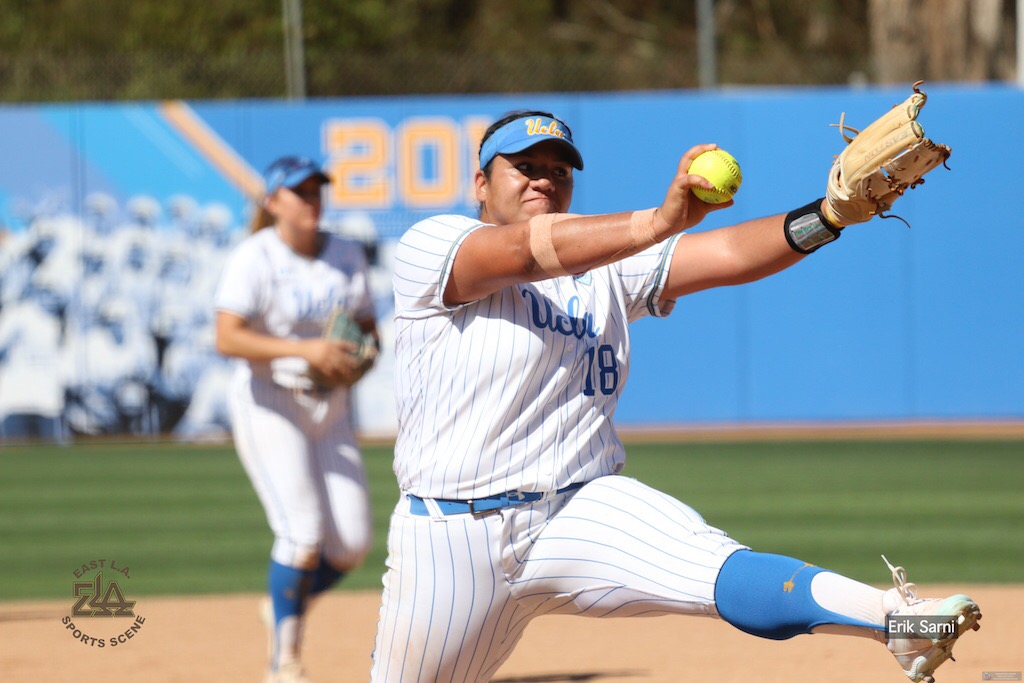 Bruin Head Coach, Kelly Inouye-Perez sent her Senior right-hander, #18 Selina Ta’amilo (9-2)  to the mound and asked her to give her best Bruin effort. Ta’amilo quite admirably responded to her Coach’s decision to start her, by pitching 5.1 shut-out innings. Using her great arsenal of pitches, she literally tamed the Huskie offensive machine, inning after inning.

Ta’amilo was aided by her team’s usual strong defense as they turned a rally-killing double play (Perez-Perez-Jordan) in the early innings, coupled with a stellar diving catch by right fielder, #88 Madeline Jelenicki, (SR), that kept the Huskies from moving runners into scoring positions for most of her outing.

The game featured an exceptional pitching duel as Ta’amilo battled her counterpart, Taran Alvelo (21-2), inning per inning. The Bruins scored the only run of the game in the bottom of the 4th, when they manufactured a run by moving #3 Briana Perez (FR) into scoring position. #48 Bubba Nickels (SO) would then drive her home with a single to rightfield. This would be the only offense witnessed by a near “sell-out” crowd at the Stadium.

Then, with one out in the 6th inning, Coach Inouye-Perez made a strategic pitching change and brought in #00 Rachel Garcia (SO) to close out the Huskies and end the inning. To Ta’amilo’s credit, her outstanding numbers spoke for themselves–5 Ks, 3 hits, 2 walks. She retired 10 batters in a row, and added “1-2-3″ innings in the 4th and 5th. In her brief reliever’s stint, Garcia retired the Huskies in her dominant fashion, thus preserving the win and the shut-out for Tao’mila, who was credited with her 10th win of the season against just 2 losses. Garcia notched her 2nd save of the season with her performance. With the victory, the Bruins reached 40 wins overall with just 3 losses and moved to 15-3 in the PAC-12.

The Bruins take a break from the PAC-12 battles this weekend as they first host Oklahoma St. and then South Dakota on Friday, 4/27 in a round-robin tournament. First-pitch times are 4:30 and 7 pm respectively.  They repeat the twin-bill action on Saturday, 4/28 at 2 pm and 4:30 pm respectively.