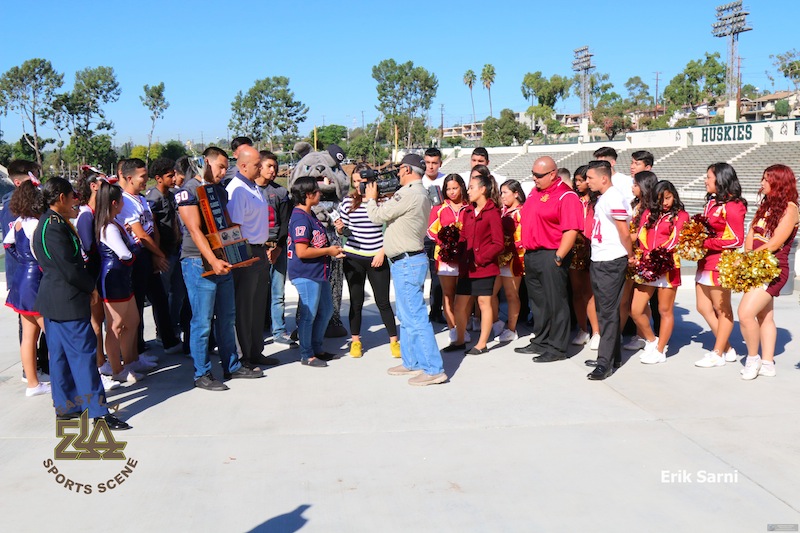 The time has finally arrive

d for the “East L.A. Classic.” The biggest high school football rivalry in the West will happen this coming Friday night, 11/4/16, at East L.A. College, the longstanding site of this classic contest between the Garfield Bulldogs and the Roosevelt Rough Riders. The JV game starts at 4:00 pm with the Varsity game set to go at 7:30 pm.

In this posting, we gladly bring you a “snap shot’ of the annual press conference which occurred at the Garden in East L.A. College’s Weingart Stadium with both schools participating in the big publicity build-up to the game. MC for the event was the widely known, much respected, and recently retired Roosevelt High School teacher, Mike Flores. Also participating in the press conference were both Head Coaches, Lorenzo Hernandez, Garfield, and Ricardo Zepeda, Roosevelt, selectees from the schools’ student-athletes who will suit-up for the game, as well as the Principals and student body presidents from each school.

Regardless of the teams’ records this season, Garfield (4-0) in Eastern league play, and Roosevelt (0-4), the greater East L.A. and Boyle Heights communities including many hundreds of their alumni, the players’ parents and families, their student bodies, and their longtime fans/followers will all turn out in force to support each of these schools and their proud traditions. This marks the 82nd time that the schools have faced up at the Line of Scrimmage and performed in this special rivalry. It’s one of the only times in high school football that both teams celebrate their traditional Homecoming Game Nights with all of its accompanying special tributes, like the presentation of “The Homecoming Courts,” etc. during the same halftime.

Look forward to a special night of festive school and community pride and spirit as competition will take place not only on the field with the teams battling it out, but also in the stands when the cheering gets going. And lastly, the amazing half-hour halftime show also takes center stage as its own form of competition between the schools’ bands, dance, flag, and drill teams. You have to witness “The Classic” in person to get the full impact and significance of the entire evening. Once you do, you’ll be in agreement with the many thousands of others, that it’s one of the Greatest Friday Night Lights in America!!

If you are planning to attend, we strongly urge you to purchase your tickets as soon as possible, or arrive early and avoid the traffic jams that wil certainly occur. Best of Luck to both schools and may the Best Team win! Rico Cabrera, Sr./Editor, EastLAsportsScene.Com